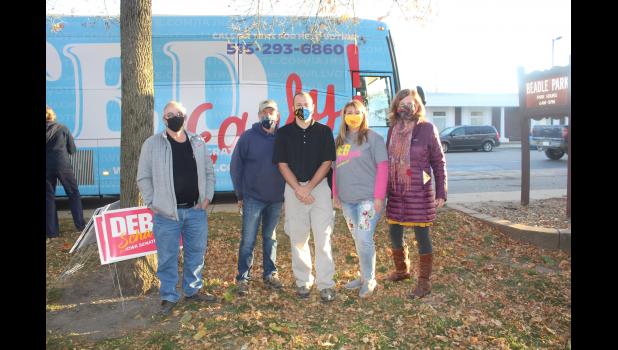 CRESCO - Five local candidates for office came out for the “Early Vote Express” bus tour through Iowa on Monday, Oct. 12 at Beadle Park. Besides promoting voting early in the Nov. 3 election, the multi-stop, statewide bus tour invites area candidates to say a few words.
Laura Hubka, Chair of Howard County Democrats, was the emcee for the event, with approximately 25 attendees. Those running for office included Deb Scharper, candidate for Senate District 26; Jane Podgorniak, House of Representatives District 51; Adam Hanson, Howard County Sheriff; Pat Murray, Howard County Board of Supervisors, District 1; and Mike Bigley, Howard County Supervisor, District 3.
Scharper stated she covers parts of seven counties. “Healthcare is on the ballot this year. I advocate for mental health care. We also need to educate our kids to go to technical schools.”
Podgorniak said, “I’ve been coming back to Cresco. It’s one of my favorite places. I’d like to be part of flipping the House. There are only four seats to flip.” Other issues she brought up were healthcare and better education funding
Hanson reminded attendees he has been in law enforcement for 16 years, most of them as a narcotics investigator. “I want to get drugs off the streets and away from our kids. Eighty percent of thefts is from drugs. My approach to law enforcement is common sense.”
Murray explained he was running for his second term. “What is super important in politics is transparency. You can go online or look on the courthouse doors to find the agenda to the next meeting. There will never be chaos at the courthouse, not like at the White House.”
Bigley of Elma said he has never run for public office before but is interested in doing a good job for the county.
The Early Vote Express is making stops at college campuses, libraries and other satellite voting locations throughout the state to distribute voter education materials.
Early voting in Iowa started on Monday, Oct. 5 and runs through Election Day, Nov 3. Iowans can make a plan to vote at iwillvote.com/IA.