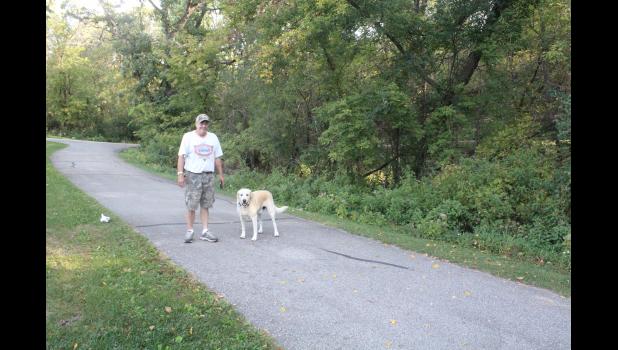 By:
Marcie Klomp ~ News Editor tpdeditor@crescotimes.com
CRESCO - “Project Coordinator Craig [Fencl] did a tremendous job of writing the grant. It is a huge ‘get’ for Howard County . . . a once-in-a-lifetime funding for trail repairs,” said Howard County Conservation Director Jeff Korsmo.
Prairie Springs and Prairie Farmer Recreation Trails will be receiving a $1,063,832 grant from the Iowa Transportation Commission for a COVID-19 relief program. It was just one of six that received a total of $5 million in funding. There were 83 applicants, applying for over $70 million.
Korsmo and crew plans to replace the deteriorating asphalt surfacing on the Prairie Springs and Prairie Farmer Trails with a new concrete overlay. Aging culvert infrastructure on both trails will also be addressed. In addition, there are some drainage issues on parts of the trail, with water running over it at times.
The director noted, “This is a heavily-used trail. COVID showed us the need for trails.” The number of visitors went up substantially during and since the height of the pandemic.
The million dollar grant should take care of the bulk of the work. Korsmo plans to take the engineering and design fees out of conservation’s budget. That way, plans have already started before the funds have been distributed, giving Howard County a little head start on the project.
The project needs to be completed by 2023, which is a lot of work in a short amount of time.
Since the project is funded by a grant, it needs to be ADA compliant. That means that the steep part of the trail will need to be shaved off, with the extra soil added to the low parts. The state is also mandating bigger shoulders.
“We have been actively searching for ways to repair the trail with the City of Cresco,”  the director added. “This is huge for Howard County and the City of Cresco.”
The plan is to have a bid-letting in spring 2022. The rehabilitation of the trail will be on the two miles from Cresco to Vernon Springs and then east from NAPA to the county line, approximately three miles.
The three-way partnership of Howard County Conservation, City of Cresco and the Prairie Springs Trail Committee has been working together since the trail was first constructed in 2000. At that time, it was a crushed gravel trail, which improved to pavement the following year.
“It has served us well, but it is time to rehabilitate it,” Korsmo said.