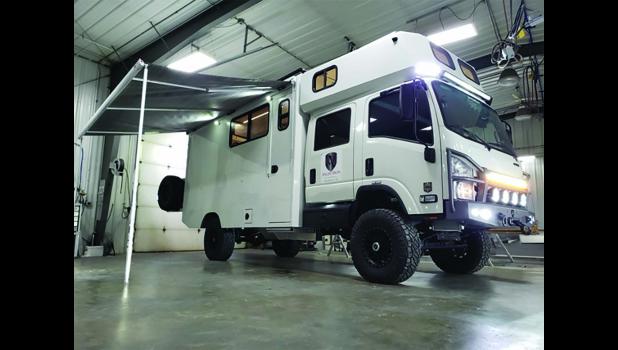 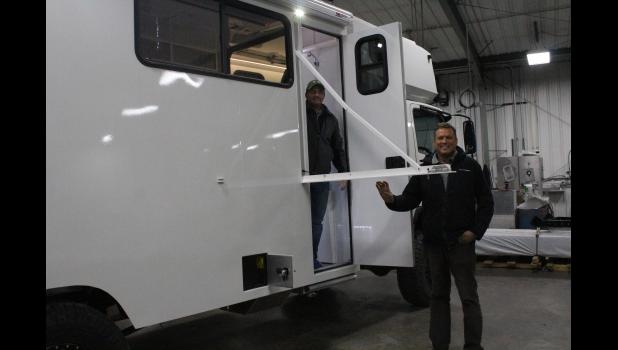 Alum-Line chosen for cost, quality, friendliness, ease of working together

By:
Marcie Klomp ~ News Editor tpdeditor@crescotimes.com
CRESCO - Wanna get back to nature? Alum-Line can help.
Wanna go where no vehicle has gone before? Alum-Line can help.
Wanna go off the grid? Alum-Line can help.
But wait! Doesn’t Alum-Line Inc. in Cresco, owned by Gary Gooder, just build trailers? That would be a great big NO!
The local company may have started out making heavy-duty farm and animal trailers, but over the years it has become a heavy-duty specialist of just about any kind of vehicle or trailer.
Its newest creation is an Expedition vehicle.
Customer Erik Petroni can attest to the care and attention Alum-Line puts into these vehicles. “I was looking for the very best of the best to build my Expedition. I got an Isuzu NPR crew cab, converted to a 4x4 by Angry Iron metal workers. I put the best suspension on the planet for the cab-over truck. And we looked around the country for the best fabricator. That’s when the name Alum-Line came up.”
He met with project lead salesman, government contract sales specialist and new concept product designer,  Mike Hanson, and described what he wanted. “Then Mike added other design elements.”
Petroni said when the vehicle leaves the shop, it will go to all the shows.
He wanted an overland vehicle because he organizes fitness running events with the U.S. military. “I wanted a vehicle that would handle all the events, in all sorts of terrain — a work truck and camper.”
The camper box is 15 ft. long, seven ft. wide and seven ft. tall, and the complete Expedition body weighs 4,500 pounds. It includes Method Off-Road Tires; the heaviest duty winch from Warn Industries; Baja Designs lights; and heavy-duty Dometic refrigerator.
The machine also includes plenty of storage, two heavy-duty arms on the outside that hold a hammock, an outside storage compartment for dirty shoes or anything else and so much more.
The roof has an observation deck that can be used for something as utilitarian as getting a 360-degree view of the camping area or as calming as watching a sunrise. It also includes a canopy to keep that rising sun off a person’s head.
The lithium batteries last for eight days without a recharge. Throw in the solar array on the roof, and a person can be off the grid for months or years with all the comforts of home.
All of these ideas were engineered by Hanson and pulled off by the employees.
Petroni first chose the company for its reputation. “They give a competitive price with cream-of-the-crop work,” he said. But it wasn’t just what he paid for . . . it was his treatment that makes him a walking advertisement for Alum-Line. “Everyone is kind and all-American. I fly in from Florida just to enjoy being around them!”
While Petroni was checking up on his vehicle, he met with another customer, Barry of Idaho, who was making modifications to his own, smaller vehicle.
They both enjoyed the ability to make their own decisions about their custom-made vehicle. Hanson said letting the customer design it themselves is a big selling point on many of their projects.
Hanson has designed several new items, including a new six-man Emergency Response Trailer body. He said, “The body is removable from the trailer, so it can be air-lifted into areas where trailers cannot operate. We currently have eight of these units around the world in places including the United States, England, Egypt, Morocco, Ukraine and other countries.”
It sounds crazy, but having customers visit Cresco from Florida and Idaho on the same day is not unusual. It happens on a weekly, sometimes daily, basis. And it is all because of dedication to perfection, keeping the customer happy and just being good people. That is what is behind the success of Alum-Line, and that is why customers come back again and again with new projects.