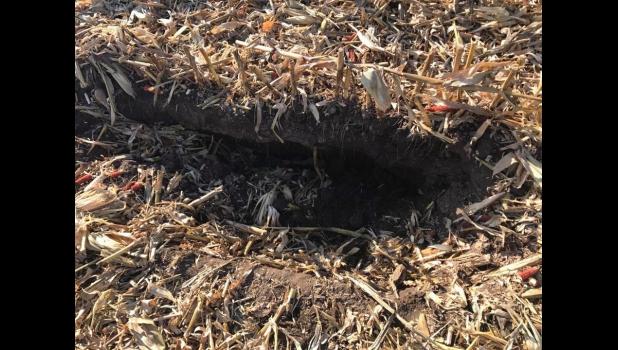 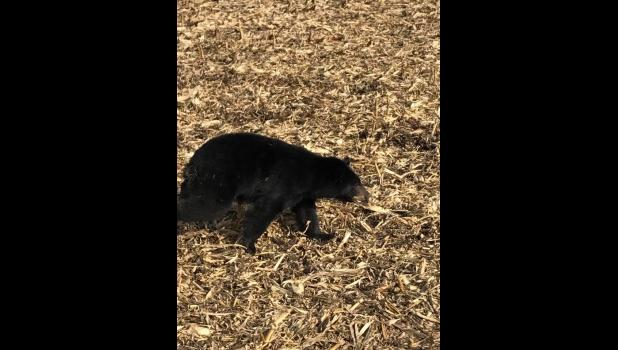 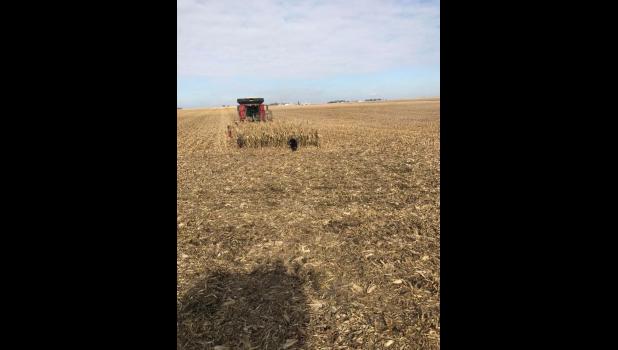 By:
Marcie Klomp News Editor tpdeditor@crescotimes.com
Schley - Usually when a person from Northeast Iowa sees a bear, it is from some sort of zoo, not from the cab of a tractor or combine! But that’s what happened to Eric Reicks and his dad, Mark, on Nov. 7, near Schley.
The duo were finishing up combining a corn field Mark rents from Wayne and Alice Carolan, four miles north of Schley, and just a half-milesouth of his home at 16828 115th St., when he spotted something. Eric told Facebook friends, “Dad called and said there’s something ahead of me. Never would have guessed it to be a bear! Glad I wasn’t too far from the tractor!”
Eric shared, “I was originally out of the tractor to take a snap video. Thought it might be a deer ready to run out, but once I saw it was a bear, I got back to the tractor!”
The black bear took off southeast into the brush, running toward Sovereign Grain.
It is thought the bear had started to make a den in the corn field to hibernate. Mark was driving the combine and didn’t see the hole fast enough. Eric said the combine wasn’t damaged. “It was just unexpected,” he noted.
After Eric posted pictures on Facebook, word spread pretty quickly about the bear in Howard County.
Harold Chapman, Conservationist for Howard County, heard about the sighting the day it happened. He said it was a surprise because usually there are sightings before now.
Normally when a bear is seen, wildlife officials track it so there is some indication of where it is headed. That wasn’t the case this time. Although Terry Haindfield, Wildlife Biologist, revealed one or two black bears had been spotted between Bluffton and Decorah over the summer. It may or may not be the same bear.
Vince Evelsizer, Fur Bearer and Wetland Biologist of Mason City explained, “Rural Iowa has a lot of trail cameras. We get good feedback and can monitor travel.” He went on to say the bear will likely move to a wooded valley or wooded bluff and get ready to hibernate. Bears usually come out when the snow is nearly melted or gone, late March/early April.
Evelsizer suspects the bear came from Minnesota or Wisconsin. Iowa used to have bears until they were killed off. The biologist said currently, there is no protection status for the black bear. “It would have to go through the legislative process.”
It is unknown whether the bear is male or female. (Reickses didn’t get close enough to check out the parts!) They are not huge animals. A normal adult female weighs around 175 pounds, and males can weigh up to 400 pounds.
The area experts gave some advice on what to do if you see a bear.
• Be cautious of your surroundings.
• Don’t approach the animal.
• Haindfield said, “People will be curious. Bears are fairly docile. You can take pictures, but do it at a distance.”
• Don’t try to feed the bear. Remove trash cans and bird feeders to get a bear to move on and back to its natural foods—tree nuts, berries, grasses and meat if it comes across it.
Any farmer can tell a person he never knows what to expect when he gets out in the field. Seeing a wild bear just moved to the top of the “Unusual List” for Eric and Mark Reicks!