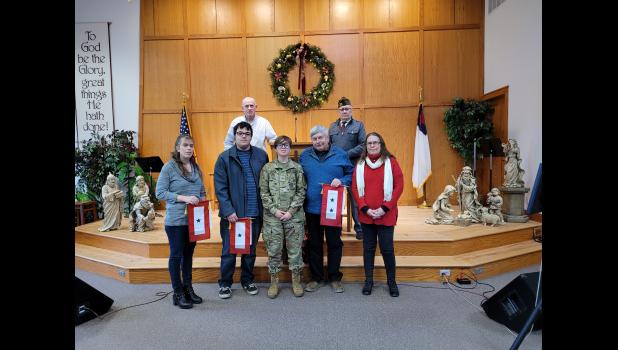 CRESCO - Private Charlotte Stinson-Larson was home on Christmas leave from her duties in Helicopter Repair with the First Cavalry Division (airmobile) at Fort Hood, Texas.
During her furlough, family members were recognized for her service by being presented with Blue Star Service Banners.
Former VFW Post 4561 Post Commander Gene Koschmeder and member Nathan Thorson had the honor of performing the ceremony at Cresco Community Chapel, where the family worships, on Dec. 26, 2021.
The banner was designed and patented in 1917 by Army Captain Robert L. Queissner of the Ohio 5th Infantry who had two sons serving on the front lines during World War I. It quickly became the unofficial symbol of a child in the service.
On Sept. 24, 1917, an Ohio Congressman read into the Congressional record that “the world should know of those who give so much to liberty. The dearest thing in all the world to a Father and Mother – their children.”
The blue star represents one family member serving in the Armed Forces. A banner can have up to five stars, signifying that five members of the family are currently serving.
The banner is typically displayed in the front window of the family home. All families with loved ones serving in the Armed Forces, Reserves and National Guard may display the banner.