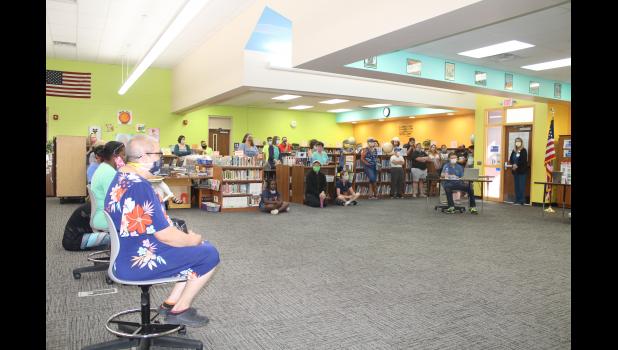 By:
Marcie Klomp ~ News Editor tpdeditor@crescotimes.com
CRESCO - Six individuals spoke about bullying and racism to the Howard-Winneshiek Board of Education during open forum at the regular meeting on July 13.
Board Vice-President Duane Bodermann started the comment period of the meeting by telling the 33 guests the open forum policy is odd in that individuals can bring issues to the board, but the board can’t respond. The comments can be discussed at a later date. “The board does appreciate your comments, though,” he said.
The first speaker was Kelli Gosch, who is trying to get a procedure and disciplines in place for students who use racial and other slurs.
“This is just a small visual of students, families and community members who are on board with the implementation of a balanced procedure of not only cultural and social education but discipline . . . discipline that forces the parents of the aggressor to engage school administration in hopes of changing the micro-aggression culture of today’s society.
“At the moment, suspension for an aggressor appears to be the most consistent way for the school to demand parental participation. Optimistically, one of two things happen. One, it will spark conversation in the home that will institute a change in heart, or at the very least, two, the parents are forced to confront the behavior in the school setting.
“The parents will know that the behavior is now officially documented, and a pattern can be established so that further action can be taken in the future and, at that point, micro-aggression can be more easily tracked when reported.
“Putting this type of procedure in place is an action that students will be able to see and understand. With any luck, their perception may be altered in a way that will encourage them to speak up and speak out about the injustices against inclusion and kindness, thus making our community stronger for current and future residents.
“Hopefully hearing some of these events will make the school board’s decision a little bit easier to define and implement a suspension discipline portion that works with the education of the current bullying/harassment policy.
“This board has a chance to be proactive as opposed to reactive and make the changes necessary so that our teachers and our youth can thrive in a safe and mentally sound learning environment.”
At the thought of telling his story, one student cried throughout the letter his mother read.
Lisa Kammerer, mother of four adopted children of color, said, “Being the parent of these kids is exhausting. When they complain, they are told, ‘There will always be bullies. You need to get tougher skin.’
“We need to make a change. We need to hold students and families accountable.”
She noted the cell phone policy, which gives clear disciplines on mis-use, has worked. “Please help us do this for our students.”
Malissa Kappes, who graduated from Crestwood High School in 1989 started her speech by giving the definition of bully: It is a verb meaning to seek to harm.
“I haven’t told many people about my experience of sexual harassment and bullying. When I told a teacher about it, I was told, ‘Boys will be boys.’ That teacher was there to protect me. I was told to grow a tougher skin.
“I had my first child as a senior in high school. I heard teachers say, ‘Don’t bother with her. She’s a nobody.’”
She noted she and her husband care about the Cresco area, but after moving back, their boys were bullied.
“Nothing was done the first, second or 20th time . . . not until his locker was defaced. My son had headaches and stomach aches because of bullies.”
Rhonda Perkins spoke in support of others. “I see the hurt shared by these people. I hope individuals will see the hurt it is causing.”
Silvia Merritt spoke on behalf of her sons, who are bi-racial. “My kids graduated from Howard-Winneshiek. My oldest son got called names every day. His girlfriend got pregnant in high school. Two teachers said my son was going to get all the white girls pregnant. When they were called on it, one said, ‘I did say it. I’m sorry.’ The other teacher denied it.
“The school needs to improve. Provide more training for teachers. Please focus on this, so every child can feel free. They need to feel safe.”
Bodermann told those gathered for the bullying issue, “There are people working on it. Thank you for your comments.”