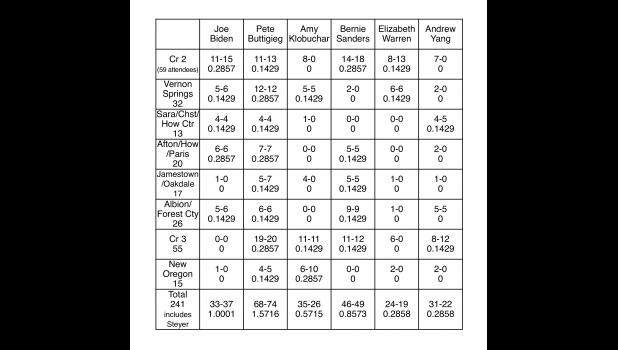 —Updated Feb. 5, 2020 at noon
By:
Marcie Klomp ~ News Editor tpdeditor@crescotimes.com
HOWARD COUNTY - Due to a glitch in the app the Iowa Democratic party was using to calculate winners of the First-in-the-Nation caucus, nobody knew who had won the race Monday evening, Feb. 3.
In fact, the first numbers released only showed 62% of the precincts counted. Howard County was one of the counties that had its numbers tallied. By Wednesday morning, 71% had been tallied.
In Howard County results showed Pete Buttigieg had the most votes, Joe Biden was second and Bernie Sanders was third. Minnesota Senator Amy Klobuchar was a close fourth.
Statewide results will be posted when available.
Chickasaw County also had Buttigieg in first, while Warren took second and Biden was third.
Mitchell County showed Amy Klobuchar as coming in first, with Buttigieg in second and Biden in third. Two precincts are still uncounted.
Buttigieg took first in Winneshiek County, with Klobuchar in second and Sanders in third.
To make things easier on the graph below, the candidates who showed very little support will not be shown. Those candidates with no supporters in Howard County included Michael Bennet, Michael Bloomberg, John Delaney, Tulsi Gabbard and Deval Patrick. Tom Steyer had four supporters in New Oregon Township, receiving the State Delegate Equivalent (SDE) of 0.1429.
Precincts included Cresco 2; Vernon Springs, Cresco 1A and 1B; Saratoga, Howard Center, Chester; Afton, Howard, Paris; Jamestown, Oakdale; Albion, Forest City; Cresco 3; and New Oregon.
Explaining the graph:
Under Cresco 2 and Joe Biden — 11 caucus-goers first supported Biden. Candidates had to get 15% of the total number of attendees to be viable. Those who supported someone who was not viable could then support one of the viable candidates, raising his or her numbers. Biden gained four more supporters, giving him 15.