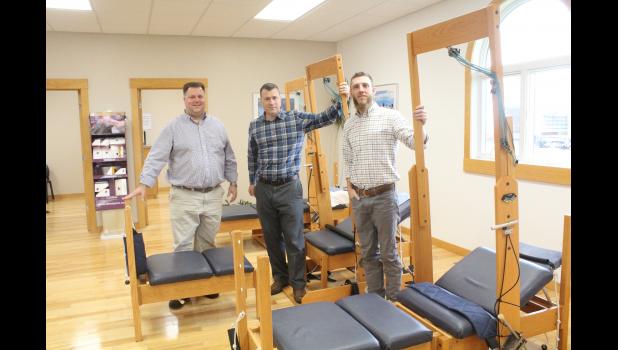 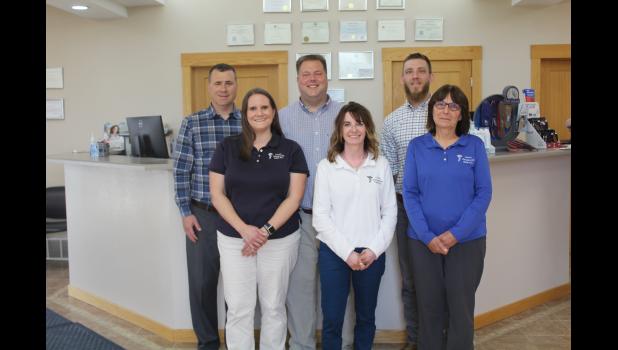 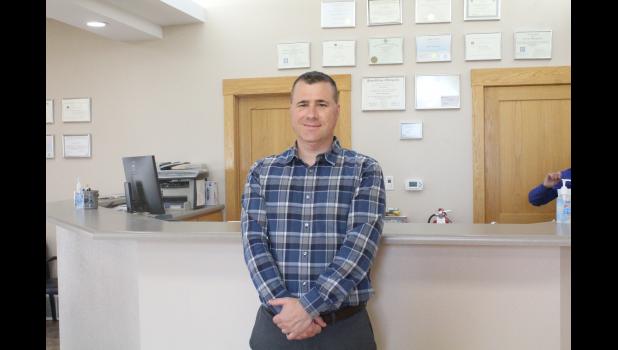 —Cresco Chiropractic in business 15 years, hires Dr. Arthur Brennan
By:
Marcie Klomp ~ News Editor tpdeditor@crescotimes.com
CRESCO - October is National Chiropractic Month, and Dr. John and Sarah Gehling are also celebrating being in business for 15 years!
The couple opened Cresco Chiropractic Clinic, located at 407 7th St. SW, on Oct. 30, 2006. Since then the business has grown. It now boasts three chiropractors and three chiropractic assistants (including both owners).
Sarah explained Drs. Gehling, Josh Lichty and Arthur Brennan complement each other. “They all have their own specialty, and they talk and consult with each other. It is a very nice blend to have the three on board.”
Dr. Gehling, D.C. graduated from Palmer Chiropractic College in 2005 and returned to his hometown to start his business.
John and Sarah have been married for 17 years and have three children, Matthew (age 15), Mark (three) and Abby (one).
Sarah is the office manager. She, as well as Lynn Weinacht and Kari Otters, who were hired in 2018, are certified chiropractic assistants and drug testers.
Lichty has been married to Cassie for three years, and they have a two-year-old son, Jackson, and one-year-old daughter, Ellie. They live on the Lichty family farm at Saratoga. Lichty also helps his dad farm.
Brennan, the newest member of the team, is originally from New Orleans. “I married a girl from Cresco, Terri Swestka, a third generation family from Protivin/Cresco.” They met in Colorado and moved in March 2020. “We wanted to raise our children here, where there are morals and values.” Their children are Isabelle (five) and Alexander (two).
He started as a fill-in and on-call doctor and is now an associate, with regular hours.
All three doctors are nationally and Iowa board certified for chiropractic physiotherapy.
Gehling and Lichty are certified in Chiropractic Bio Physics (CBP). Gehling is additionally a CBP Distinguished Fellow. The next closest CBP-certified doctors are located in LaCrosse.
CBP has an emphasis on spinal remodeling and mechanical traction. This has been published in numerous peer-reviewed journals as proven to be safe and effective treatment for many spinal conditions, including degenerative diseases, postural distortion, text neck and even scoliosis.
In addition, they both are on the National Registry of Certified Medical Examiners to do DOT physicals. They are both certified for drug and alcohol testing and specimen collection. Brennan is working toward certification of these as well.
Gehling is certified in all four parts of the National Board of Chiropractic Examiners and NBCE certified in physiotherapy; OSHA and NIOSH Certified Lung Function Testing (Spirometry), Hearing Testing and Respirator Fit Testing.
Dr. Lichty, D.C., also graduated from Palmer in 2014 and started at Cresco Chiropractic in March 2015. He is certified in Graston Technique (soft tissue mobilization) and Spirometry.
Dr. Brennan, D.C. graduated from the University of New Orleans in 2005 and the Sherman College of Chiropractic in South Carolina in 2012.
He was in a car accident in 2001, which resulted in daily migraines and neck pain. “I received chiropractic care, which is why I went into chiropractics.”
Brennan is certified in Palmer Upper Cervical Technique, Activator Technique and Blair Upper Cervical Technique, all of which focus on the alignment and proper adjustment of C1, a.k.a. the Atlas vertebrae.
Other services Cresco Chiropractic provides are pre-employment and school athletic physicals.
Some of the many therapies available are traction, posture corrective exercises and orthopedic exercises, ultrasound, interferential current (muscle stim), TENS (electrical nerve stimulation), cold laser therapy, cryotherapy (cold or ice therapy), VibraCussor® (vibration or percussion), myofascial release (deep therapeutic massage), Posture Pump® disc hydrators, Denneroll orthotics® and TheraBand®.
Products available for purchase include Foot Levelers®, spinal or pelvic stabilizers, braces and supports and exercise rehab equipment.
Supplements available include vitamins, Nordic Naturals Omegas®, MetaGenics products®, Renew Life® supplements, SinuCleanse® and Kinesio® tape.
Dr. Gehling is in the office every day — Mondays, Wednesdays and Fridays from 9-5 and Tuesdays and Thursdays from 9-1. Dr. Lichty works on Mondays, Wednesdays and Fridays, while Dr. Brennan is in the office on Tuesdays and Thursdays.
Patients can see all three chiropractors. They are accepting new patients with all conditions.