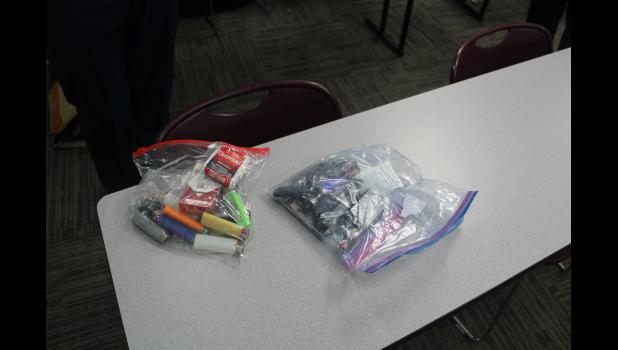 By:
Marcie Klomp ~ News Editor tpdeditor@crescotimes.com
CRESCO - “The data shows kids are vaping*. According to a survey taken a year-and-a-half ago, we are at 19% of students who have tried vaping. Across the state, the average is 23%,” 7-12 Principal Chris Rogne told Howard-Winneshiek board members at the Dec. 16 monthly meeting.
“We’re not trying to ‘catch’ kids. This is for prevention and encouraging smart, safe and healthy choices,” he added.
The tipping point on whether to go forward with detectors was when Rogne was recently contacted by a principal from another district. “We went to a team event at another school and their detector went off. When they looked at the camera footage outside the restroom at the time of the alarm, they saw one of our students coming out.”
He noted cameras will not be installed in the restrooms. He proposed installing a Halo Smart Sensor in each of the four high school restrooms. They will be able to detect sound and chemicals and will monitor air quality.
“The total cost will be $3,885. We are pursuing a grant to pay for up to half the cost,” he said.
Supt. Ted Ihns added, “The e-cigarette companies are marketing this for kids. They are being made to try to hide it.”
In addition, Rogne told the board, “Our kids want to go to school in a clean and safe environment.
* - Vaping and JUUL®ing are the acts of inhaling aerosolized liquid from a device, sometimes called a vape pen or an e-cigarette.