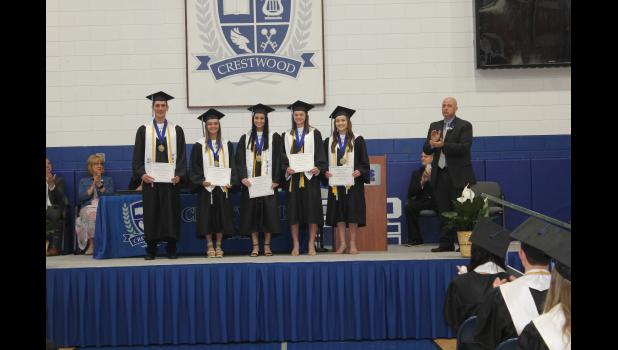 By:
Marcie Klomp ~ News Editor tpdeditor@crescotimes.com
CRESCO - The Crestwood High School gymnasium was full of family and friends of the graduating class of 2022 on Sunday, May 15.
During the ceremony, the students with the highest grades are always recognized. This year, five individuals were named valedictorians. They are Nicholas Dietzenbach, Abbey Fencl, Kyleigh Foster, Nicole Pecinovsky and Emily Voyna. Madison Ollendieck was the salutatorian.
Before that, the 93 graduates of the Class of 2022 made a loop around the gym and then found their seats. Supt. Ted Ihns welcomed everyone and introduced the Howard-Winneshiek School Board — President Alison Holten, Vice President Shirley Sovereign, Directors Toni Johnson, Andrew Ludeking and Tom Williams and Secretary Robyn Lane.
DaéAuna Dixon was the student speaker. She kept the speech short and sweet, but it made an impact on the crowd.
She started with a quote. “Goals make you focus but dreams give power, by John Maxwell.
Sunday, May 15, 2022 is just like any other day for most people. Personally, it is the day I have been dreaming of. I spent most of high school career imagining myself walking across the stage, smiling at my classmates.” She noted that is a small goal, but wanted to recognize some classmates who already have or have achieved high goals.
“Kyleigh Foster plans to receive a degree in excercise science and achieve a doctorate in physical therapy. Abby Buls  set a goal of bettering herself every year, and I say with confidence that she is an amazing young woman.
“Sometimes our dreams seem too big to accomplish, but this graduation class faces the with determination.
“When Nick Deitzenbach realized he wanted more out of college, he set the goal of getting into the Naval Academy. And he made it. I would have set the goal, too, but I can’t swim and you have to learn eventually.
“Carter Fousek had a dream. When he was 10, he dedicded he wanted to be a four-time wrestling state champion. He halted his other activities and dedicated his time year-round. I don’t know if you’ve heard, but he did it!
“My point is that anyone can be a dreamer. But it takes work. We have to be willing to make the plan, put in the hours and follow through if we expect to achieve our dreams. If anyone can do that, it would be my fellow classmates. They are some of the most determined individuals I know, and they have shown me what it means to accomplish your dreams.”
The Concert Chorale performed “Omnia Sol” and the senior choir sang “A Celtic Blessing.”
Principal Chris Rogne explained the gold cord around some of the seniors’ necks represents those who attained a cumulative grade point average of 3.5 or above.
The valedictorians and salutatorian were then named, and all the seniors received their diplomas. When the Class of 2022 was introduced to the crowd, cheers and mortar board hats filled the air.
Congratulations to the 2022 graduates!