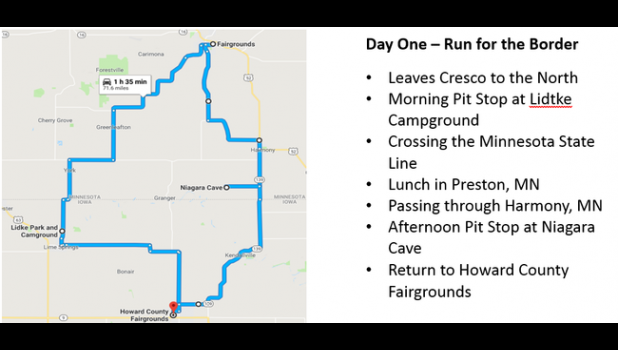 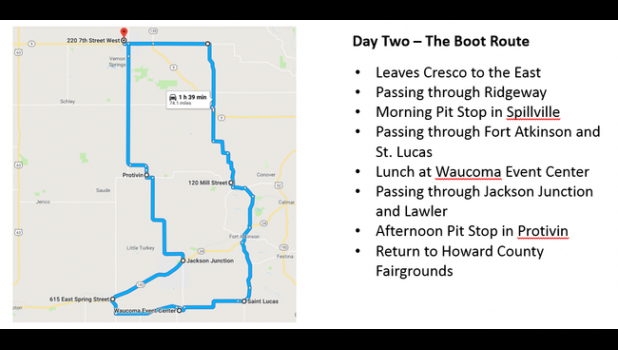 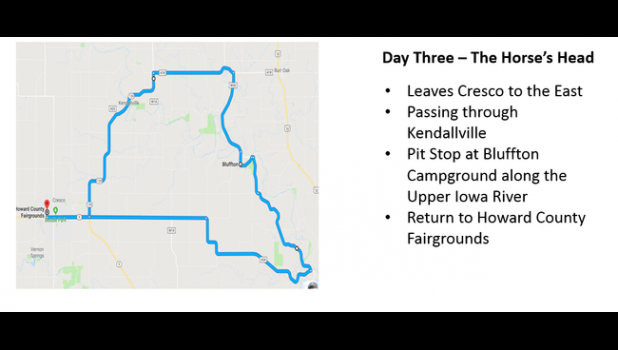 Cresco is home base for three-day tractorcade

By:
By Marcie Klomp ~ News Editor tpdeditor@crescotimes.com
‘We have an open invitation for locals to join the tractorcade. It’s lots of fun, and you will make new friends.’ — Matt Kenney, Tractorcade co-organizer
Cresco - Cresco and surrounding area will be getting an influx of tourists June 9-12 when WMT Radio’s Great Eastern Iowa Tractorcade makes its way through the region.
Howard County Fairgrounds will be the home base for the event.
The announcement of where the 20th annual tractorcade was to take place was announced on Tuesday, Jan. 8 during WMT’s Ag Expo in Cedar Rapids. A special radio guest was Howard County’s own Spiff Slifka of Business & Tourism!
She said last fall Matt Kenney and Bill Poston, co-organizers of the tractorcade, visited the area on a scouting  trip. HCB&T was notified in November that Cresco was chosen as the overnight stay. “We had to keep it a secret until it was announced on Tuesday,” she said.
After the announcement, Slifka was interviewed by Bob Quinn and Andy Peterson of The Big Show on WHO radio. “I’ve gotten a ton of e-mails and phone calls of all the local people who listen and heard me on the radio!”
She talked about many of the finer points of Howard County and Cresco, including the Borlaug Farm, which will be especially interesting to the ag-related event, and the Freedom Rock.
“I was told when the ride is over, many of the participants will stick around to visit some of the sites they saw along the ride,” she explained. “This is a great way to showcase who we are.”
Kenney said about 170 individuals who attended the Ag Expo have already signed up. “We have an open invitation for locals to join the tractorcade. It’s lots of fun, and you will make new friends.”
Sign up at  https://600wmtradio.iheart.com under “Blogs,” or check them out on Facebook at The Great Eastern Iowa Tractorcade - 20th Anniversary Edition.
Why Cresco?
On this, the 20th annual ride, Kenney noted they chose northern Iowa because it is a more interesting ride than other parts of the state.
“With 500 tractors and 300-400 trucks and trailers, we need a lot of space. We mostly stay at fairgrounds, and Howard County was very accommodating. It has campsites, lots of room and nice buildings,” he stated.
He noted finding an area for the ride is a logistical challenge. The organizers want the routes to be interesting for the drivers and have hard surface roads but no major highways. They rely heavily on county engineers to help them with the routes.
This year, the routes take tractorcade riders through Howard, Fayette, Chickasaw and Winneshiek Counties in Iowa and Fillmore in Minnesota.
They have been to Decorah in the past, but this is the first time the ride has come to Cresco.
Not like RAGBRAI
Slifka and Kenney have already received requests to have stands along the route in towns or in people’s yards.
“This isn’t like RAGBRAI. The tractors go out in six groups and are told they can’t stop along the route at a lemonade stand. There is a timeline to get from one authorized spot to the next.” Tractors are a little bigger than bicycles and can’t just pull off the road.
Like RAGBRAI
Although the Great Eastern Iowa Tractorcade is smaller than RAGBRAI, there are some similarities. Riders like to keep their tractors shined up and even decorate them to make them unique.
Also, participants come from all over. Kenney said he already has some from Kentucky and an annual rider from California. “He was raised in Iowa and drives his grandpa’s tractor every year,” he said. In addition, riders have made friends and enjoy meeting up every year.
20th year is special
Besides being the first time Cresco is hosting the tractorcade, it is also the first time the route will travel into Minnesota.
As Kenney and Poston were driving the area looking for routes, they started referring to them as “Run for the Border, “The Boot Route” and “The Horse’s Head.”
The first leg of the ride on Monday, June 9, is “Run for the Border.” A pit stop will be made at Lidtke Park at Lime Springs and cross the border, with riders having lunch in Preston. They will pass through Harmony and make an afternoon pit stop at Niagara Cave before returning to the fairgrounds.
On Tuesday, riders will take “The Boot Route.” This will go to the east, passing through Ridgeway, with a pit stop in Spillville. They will then pass through Fort Atkinson and St. Lucas with lunch at the Waucoma Event Center. In the afternoon, they will pass through Jackson Junction and Lawler and make a pit stop in Protivin before returning to the fairgrounds.
“The Horse’s Head” route travels east as well, passing through Kendallville and stopping at Bluffton. They will then return to the fairgrounds.
The stops will have appropriate foods available for a donation. Kenney said most stops get $500-800 in donations.
He also said finding pictures in the routes and naming them may become a new tradition!
Fairgrounds
As mentioned, Howard County Fairgrounds will be where the tractors are parked for the evening.
Last year, the fairgrounds was the overnight stop for the North Iowa Tractor Ride. The Great Eastern Iowa Tractorcade will likely be similar, with tractors being shined up and displayed for anyone to check out.
Food will be available in town and at the fairgrounds.
For 3-4 days in June, Howard County will see a boost to its population by 1,000-1,200 individuals. Write June 9-12 on your calendar for something new and fun in Howard County.