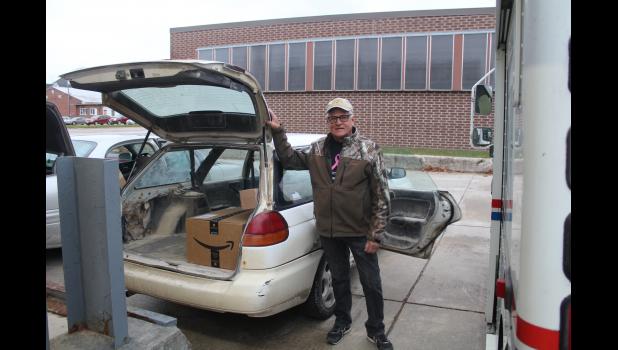 CRESCO - Pat Darland hung up his keys as a United States Postal employee after 40 years on Friday, Oct. 29. Now he can put the backseat back in his car and drive for himself! (Otherwise, his back cargo area was full of packages.)
He figured on average he drove 100 miles a day, 600 a week, 2,400 a month and 28,800 a year. Multiply that by 40 years and it equals 1,152,000 miles! That’s a lot of gas!
Regular mail has changed over the years. There is less first class mail and more business class letters. Darland said more people are banking online or doing business by phone or e-mail.
Parcel deliveries have doubled in the past 3-4 years as shopping online has become more commonplace. This past year, he figures he delivered about 100 parcels a day, with his entire load running around 1,500 pounds or more.
Darland graduated from Crestwood High School in 1975. He then joined the Navy for four years, worked for his brother in Oelwein for six months and then owned Little Chicago Tavern for a few years before starting his 40-year career with the post office.
On his retirement, Darland reflected on his years with the post office and the people he met and worked with.
“I started in 1982 working for Marty Hudecek as a sub for Don Breitsprecher. It was called the Star Route, where you picked up mail early in the morning from Decorah and took it to Ridgeway, Cresco, Lime Springs and Chester.”
He then became a sub driver for Larry Soukup on the East Route, which picks up mail in Decorah and takes it to Waukon, Waterville and Dorchester.
For both those routes, in the evening drivers picked up the outgoing mail and took it back to Decorah.
In 1988, he was hired by Dennis Ruffridge as a rural sub. “My mom and dad gave me their Buick to run the route. I was offered a rural sub carrier job for Raymond Murray. I worked for Raymond for a few years.  When I started with him, they had a mail case made out of wood with 400 square sections. I asked Raymond, ‘How do you know the different addresses?’ He answered, “Well this person gets a newspaper, and this one over here doesn’t.’ I was confused but moved on.”
He then got the chance to sub for Dick Zak, because it was a better route. Soon after that, Hudecek had a heart attack and Darland was able to  work on Rural Route 2.
“I carried for Marty while he was recovering from his heart attack.”
After 10 years of part-time work, Fred Mumfre retired, which gave Darland the opportunity to take a full-time position with Rural Route 1 in 1992.
In 2001, 911 started being mandatory with addresses and street signs.
“They changed the mail cases, because the boxes weren’t numbered. They had addresses, streets and numbers and reorganized the routes. I lost 17 miles around the Protivin area, and they made all the routes around 100 miles each. I ended up with East Park and Webster Addition in Cresco, where I was at when I retired.
“In 2002, I lost my license, and the Post Office stuck by me. I was allowed to hire someone to drive me around the route for one year. I asked Gary Cleveland. He said, ‘There won’t be any horsing around.’ We got the job done on time.”
Cleveland drove, and Darland had the mail ready for the next mailbox. “We made good time,” he said.
One time there was a guy fixing a flat tire in the middle of the road. Instead of turning around and going back, Cleveland drove down in the ditch and right back out!
Driving a mail route gives a person lots of time to think.
Darland said he often wanted to have a party for all the customers who had big mailboxes. The bigger mailboxes are more convenient for the carriers delvering all the parcels and boxes. “Amazon drops 3-4 pallets a day here in Cresco at the post office,” he added.
The mail carrier figured if he gave out a steak dinner and drink for two, maybe their neighbors would put up a big box as well, so they could come to the party the following year.
“I never got around to it, but I really think they should put up a big box for the mail carrier today, rural and city.
“People should buy locally from their retailers if they want merchants in town to survive. This is just my opinion. We need to keep our tax base in our downtown. You should  support your local businesses.”
Now that he is retired, Darland is taking it easy. “I used to wake up at 5 a.m. I still wake up at that time, but now I don’t get up until 8. When working, you get up early to eat breakfast and make sure everything is running . . . especially in the winter. I don’t have those worries any more.”
Since retirement, “I do what I want to do. I have several grandchildren, so I will be more involved with them.”
After driving for 40 years and over one million miles as a rural carrier, Darland is just going to take it easy.