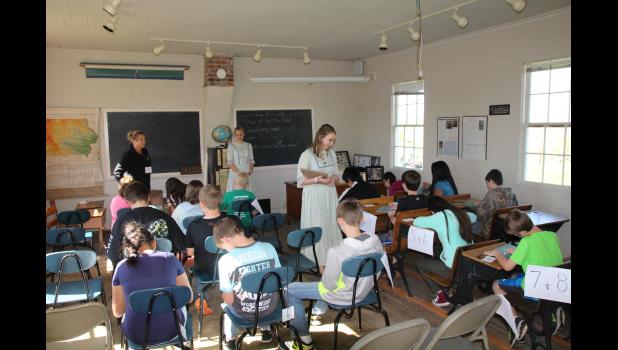 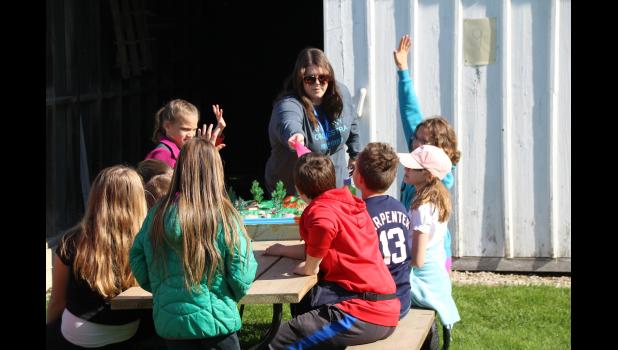 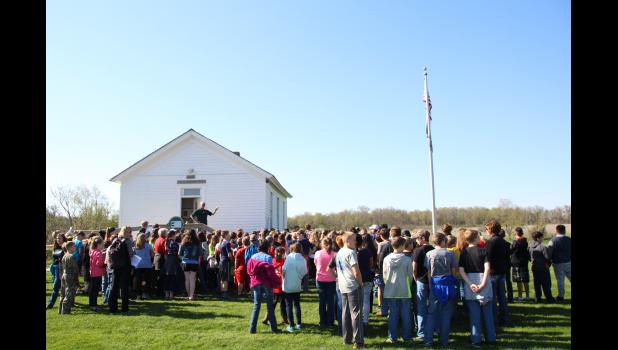 By:
By Sara Stromseth-Troy TPD Staff
CRESCO - Approximately 250 fifth grade students visited the Norman Borlaug boyhood farm, near Protivin, south of Cresco, Friday during Inspire Education Day.
Inspire Education Day, held in the fall and again in the spring, features workshops in the fields of science and social studies for area fifth grade students. Students learn about Dr. Norman Borlaug (1914-2009), a Cresco native known as ‘The Father of the Green Revolution’ and winner of the Nobel Peace Prize in 1970.
The Norman Borlaug Heritage Foundation hosts the event, which features collaboration from Iowa State University, the University of Iowa, and Luther College.
A collaborative effort
Tom Spindler, operations director and education coordinator for the Norman Borlaug Heritage Foundation, said, “This has been a collaboration with Luther College for about six years now. We’ve had Inspire Days in the fall for about 10 years with Iowa State University and the University of Iowa, but the (spring) Inspire Education Day got started a bit later. These (Luther College) students are going to be student teaching in the fall, so this is their final project to get them ready. It’s a great collaboration that uses science, social studies and global issue like world hunger.”
Barb Bohach, associate professor and department head in the Education Department at Luther College, said, “All of the students are majoring in elementary education at Luther College and have been through science methods and social studies methods.”
The science and social-studies oriented stations were situated around the Borlaug farm, including in the schoolhouse.
Education stations
At the Soil Health & Conservation station, Luther College senior Todd Conway from Castalia described what the fifth grade students would learn:
“We’re looking at the benefits between till versus no-till practices. Your soil is healthier when you don’t  till your land, so farmers will end up being more productive. When you till your soil, it’s more apt to erode.”
When you no-till, you will spend less time in the fields, will use less fuel, you’ll get better yields and water quality in general is going to improve because you won’t be getting all of this erosion into the streams,” he said.
Averie Manke, a Luther College junior from Wauwatosa, Wis., and Erika Hinz, a Luther College senior from Rushford, Minn., described what students would learn at the the Seed Germination station:
“We’re teaching about seed germination and Monocot and Dicot plants. We have two different types of seeds, and students will get to plant them and germinate them in necklaces. Over the next week they will get to watch them sprout, grow and germinate. It will grow in the necklace and they can take it out of the necklace and plant it. If it’s a Monocot it will grow one leaf, or a Dicot it will grow two leaves.  They will be corn and soybeans,” Manke said.
Opening remarks
At 9 a.m. Friday, the students gathered around the one-room schoolhouse on the Norman Borlaug boyhood farm, and Tom Spindler addressed them as follows:
“Norman Borlaug moved to this farm when he was eight years old in 1922, 95 years ago. This is the one-room schoolhouse he went to from the time he was a 5-year-old until he was 13. There is a lot of history in this school for this man, to get all of his elementary education in this building.
“You have a wonderful day; this is the best weather we’ve ever had. We always have our opening ceremony of saying the Pledge of Allegiance to the flag.”
Following the recitation of the Pledge of Allegiance, Spindler continued his remarks:
“Today we have about 250 fifth graders from Decorah School system, New Hampton School system and St. Joseph’s Catholic School in New Hampton. We also have our foundation members, who are part of the Norman Borlaug Heritage Foundation. That is a group that helps take care of this farm, and puts on programs like this.”
Spindler described what the students could expect during Inspire Education Day:
“Today, you’re going to be going to different sessions throughout the day taught by the Luther College student teachers who are getting ready to go out and student teach in the fall. Some of them may be in your classroom someday. They will be putting on exciting lessons for you today.”
The stations included One Room School, Water Quality Dissolved in Oxygen, Prairie Pollinators—Bees; Seed Germination, Soil Health & Conservation, Seed Economics, Hunger Obstacle Course, Foods Web, Water Quality-Effect of Fertilizer and World Hunger II.
About the foundation
According to the Norman Borlaug Heritage Foundation website:
‘The Norman Borlaug Heritage Foundation is a non-profit corporation dedicated to the preservation of the Birthplace and Boyhood home of Dr. Norman E. Borlaug (1914-2009), where he established his values and work ethic. The Norman Borlaug Heritage Foundation is committed to promoting Dr. Borlaug's lifetime achievements and philosophy through educational programs.
‘Since 2000, the NBHF has had the privilege of preserving both the birthplace and boyhood farms so that future generations of Normans can walk and learn on these sacred grounds. It is here, on this Norwegian farmstead in scenic Northeast Iowa, that Norm once played and learned about agriculture firsthand.
‘Education is the second focus for the NBHF. We hold annual educational events each spring and fall for school children, host tours, and most recently, adult education days. We are committed to providing a learning environment rich in unique opportunities.’
For more information about the foundation, visit the website http://www.normanborlaug.org/.