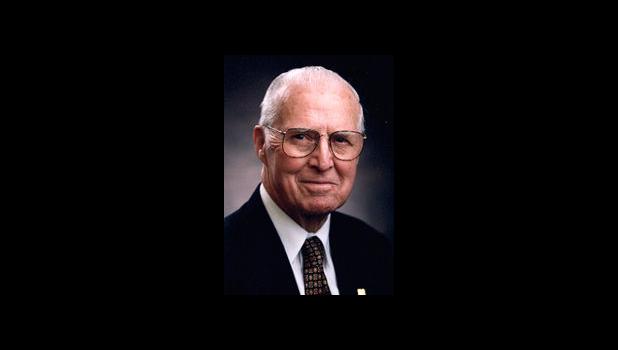 —CIDC/Chamber banquet honoring the event
CRESCO - It was just a short 50 years ago that one of the area’s most famous individuals was honored with the Nobel Peace Prize.
Dr. Norman Borlaug was just one of thousands of students to walk the hallowed halls of Cresco, Notre Dame and Crestwood High Schools.
He graduated from Cresco High School in 1932, receiving the Legion Citizenship Award. It is given to the person on basis of courage, character, service and scholarship. It was the first of many such awards presented to the future scientist.
On Oct. 21, 1970, it was announced Borlaug, at the age of 56, had won the 1970 Nobel Peace Prize. People from around the world were thrilled to hear the news. But it was at Evans Memorial Home, where his parents, Henry and Clara Borlaug, were living, that perhaps showed the most emotion.
Path to greatness
Borlaug learned how to be a hard worker from his parents and grandparents. They instilled in him the need to go above and beyond.
One of the most important pieces of advice Borlaug took to heart was from his wrestling coach and principal at CHS, Dr. Dave Bartelma, who told him, “Give the best that God gave you. If you won’t do that, don’t bother to compete.”
Well, Borlaug took that advice to heart and went on to attend college at University of Minnesota and received a bachelors in forestry during the Great Depression. Unable to find a job in his chosen field, he went back to school and earned his Masters and PhD in Plant Pathology.
After World War II, when he worked for DuPont, he went to Mexico through the Rockefeller Foundation. He developed high-yield and disease-resistant varieties of wheat. His research allowed poor countries to double their wheat yields, saving millions of people from starvation.
He has been called “The father of the Green Revolution” and is credited with saving over a billion lives! And yes, he came from rural Howard County.
Besides Mexico, Borlaug worked with farmers in India and Pakistan and other countries in South Asia, Middle East and Latin America.
Awards
He went on to receive the Presidential Medal of Freedom in 1977 and the Congressional Gold Medal in 2006, only one of seven individuals to achieve the trifecta. Others in that category include Dr. Martin Luther King, Jr., Elie Wiesel, Nelson Mandela, Aung San Suu Kyi, Mother Teresa and Muhammad Yunus.
Borlaug received the actual Nobel Peace Prize and a cash prize in Oslo, Norway on Dec. 10, 1970, and returned to Cresco a couple weeks later. He was welcomed and spoke at many different venues.
The first event took place at Crestwood High School, where he lectured to about 75 press representatives, with lunch following. In the afternoon, he drew an audience of nearly 2,000 individuals, with a reception afterwards. Then in the evening, a dinner was held at the Heritage (formerly Tower Club).
After he won the Nobel Peace Prize, Dr. Borlaug realized there should be a prestigious, international award given each year to honor the work of great agricultural scientists, who are working to end hunger.
In 1986 he founded the World Food Prize, which is an annual $250,000 award. The World Food Prize is located in Des Moines at the Dr. Norman E. Borlaug Hall of Laureates.
In addition, Oct. 16 is recognized yearly as World Food Day since 1979 in Iowa and Minnesota, and is known as Dr. Norman Borlaug Day.
On the anniversary of Borlaug’s 100th birthday (March 25, 1914) in 2014, a statue of him replaced another statue at Statuary Hall in the Capitol building in Washington, D.C. The seven-foot bronze statue depicts him at work in a field.
In honor of the Howard County native, the Borlaug Heritage Foundation has Inspire Day at this boyhood home and birthplace. The first year was fall 2008. A few years later, more schools were added, and a spring celebration was included. Fifth grade students from area schools learn about agriculture and Dr. Borlaug in the spring (sponsored by Luther College students and teachers) and fall (Iowa State University).
For the past several years, the students have participated in a food packaging event, where they put together around 10,000 meals to help those less fortunate . . . the lifelong mission of Dr. Norman Borlaug.
It goes to show he has touched lives in foreign countries and in his own childhood back yard, literally.