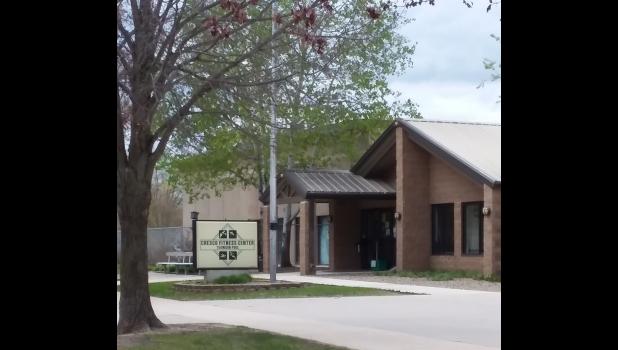 —Overall finances will be okay
CRESCO - Since the closing of Cresco Fitness Center on March 17, and not opening until May 18, City Clerk Michelle Girolamo anticipates the facility will lose around $89,000 in revenues.
At the May 4 City Council meeting, Girolamo reminded Council members of fitness center events.
Schools closed on March 17 due to coronavirus, and the City of Cresco opted to close the fitness center, along with the library, theatre and city hall, to customers and patrons. Shortly thereafter, the state of Iowa also closed fitness centers, libraries and theaters.
At a special meeting on March 27, Council voted to waive fitness center dues only for the month of April even though for part of March, members were unable to use the facilities.
On April 27, Gov. Kim Reynolds signed a proclamation allowing the opening of fitness centers and libraries at 50% of legal capacity. The pool will not be available nor the locker rooms. Cresco city officials decided to have a soft opening of the two facilities on May 18.
On May 4, the council voted to waive dues at the fitness center another month.
Girolamo explained waiving dues (about $25,000 per month), losing daily sales (about $8,000) and cancelling swimming lessons and summer recreation programs will mean the fitness center will bring in nearly $90,000 less than expected. This includes having less expenses (about $13,000 in part-time wages).
She added the City has 22 delinquent utility bills from 22 customers, including seven who haven’t made a payment since March 1.
Council decided to waive the May 13 late penalty fees due to COVID-19 and to not mail the delinquent notices. All residents are asked to pay as much as they can on balances.
Girolamo noted the Iowa Utilities Board is requiring cities to report on past due accounts through September and into next April.
The May Kessel Lodge rent for the mealsite was also waived.
“Our Local Option Sales Tax (LOST) fund should be okay. Some businesses are doing better than ever during the pandemic, while others are shut down.”
She added the majority of the city’s income is from property taxes, and that should still come in, although some funds may be late.
Council member Dave Brenno asked if some projects could be held off for a year during this unknown time. He mentioned the East Park bleachers and the scene shop at the theatre.
“I already sent a memo to the department heads to come to me or Rod (Freidhof, Public Works Director) before starting a project,” the City Clerk said.
She acknowledged the sidewalk and bleachers projects can be postponed, and the scene shop may or may not be able to be put off. But sealing the well casing has to be done.
• In other business, Girolamo reported 67% of the county and 71% of Cresco has completed the 2020 Census survey.
• The Revolving Loan Fund offered for Cresco businesses had seven new applications. May 18 is the deadline to have the applications completed.
• Freidhof said his departments are staying busy. “We are finishing up the Vernon Road project and sand blasting and painting water hydrants.”
• Council approved amending the current city budget.
• After the third readings of Ordinances 483 and 484 were completed, they were approved.
Ordinance 483 is in regards to amending water rates within and outside the City.
Inside the City
~ The first 7,000 gallons used per month will be at $5.18 per 1,000 gallons, with a minimum bill of $7.78 for 1,500 gallons.
~ Next 60,000 gallons is $4.73 per 1,000 gallons.
• Over 60,000, the cost is $4.33 per 1,000 gallons.
Outside the City
~ The first 7,000 gallons used per month will be at $10.36 per 1,000 gallons, with a minimum bill of $15.54 for 1,500 gallons.
~ Next 60,000 gallons is $9.46 per 1,000 gallons.
~ Over 60,000, the cost is $8.65 per 1,000 gallons.
Ordinance 484 is in regards to raising the sewer rates.
~ Cost is $8.84 per 1,000 gallons within City limits, with a minimum of $13.26.
~ Cost is $17.67 outside City limits, with a minimum of $26.51.
~ A $3.50 per month Capital Improvement Fund fee will be charged per month.
• A public hearing will be held on May 18 for Ordinance 482, which pertains to mobile food trucks.
• Council went into closed session to discuss possible litigation issues. The meeting was adjourned.