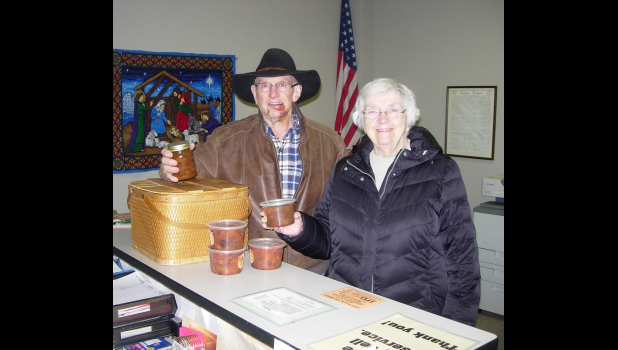 By:
By Marcie Klomp News Editor tpdeditor@crescotimes.com
CRESCO - The Dr. David and Darlene Shaw recipe for fruit soup came from her mother and grandfather, who probably brought the recipe from Norway.
Darlene would make the soup, which is a thick sauce of dried prunes and raisins that have been rehydrated and chopped into small pieces. It can be eaten by itself or as a topping on pancakes, waffles or ice cream. “Some thin it with brandy and use it as a glaze on turkey or ham,” David explained.
After David retired from the dental business 13 and one-half years ago, he took the recipe a few steps further.
Darlene commented, “He started doing it when he retired and changed the recipe.”
David added apricots, peaches, pears, nectarines and apples to the prunes and raisins, along with large pearl tapioca, cinnamon sticks for flavor, lemon juice and 100 percent grape juice.
He knows his way around the kitchen because he does a lot of the cooking. “I do almost all the breakfasts and a big percent of supper. She’s usually quilting in the basement.”
When the former dentist decides to start the process of making fruit soup sometimes in the fall, he pulls out all the stops. He goes BIG! He doesn’t make a small batch, he makes 3-4 large batches here in Iowa, which add up to a total of about 50 gallons in quart and pint containers.
“One batch used to be 10 gallons. Now I do 17-18 gallon batches and make at least three full batches and a smaller one,” David stated. “One of the secrets to the soup is only using dried fruit. The fruit is cut into small pieces. No sugar is added. It’s all natural sugar.”
On the first day, the pearl tapioca was put in a pot of water to soak. The next day all the fruits are weighed out. After the water is boiling, the hard fruits are thrown in for four hours with the pots being stirred every 15-20 minutes “until I go to bed,” David noted. He has used one-18 quart pot and two-22 quart pots. Lately he has changed to roaster ovens, which takes some of the stirring out of the equation.
The soup is definitely a favorite in the family. The elder Shaws made a huge blunder one Thanksgiving when they went to a holiday dinner and forgot the most important dish - fruit soup! Darlene said they were forgiven when the dish was packed up and mailed off that Monday!
Most of the Shaws’ fruit soup is given away to friends, family and those they do business with.
Then the couple travels to Oregon to a daughter’s home for Christmas, and he makes another 17 gallons, which he allows the kids to distribute!
David has given a downsized version of his recipe to those who have asked, and many say it just doesn’t taste the same as his. Perhaps they forgot the most important ingredient - family and tradition.