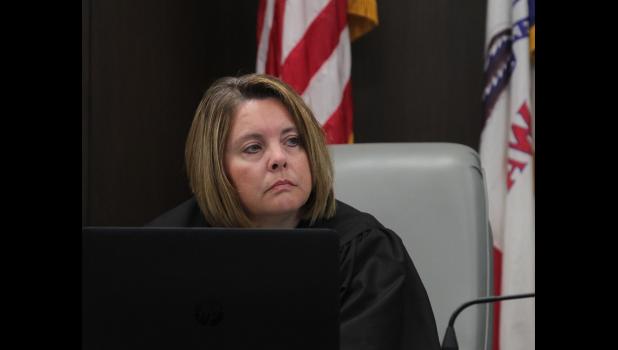 Fullhart formally sentenced to life in prison without parole

By:
Marcie Klomp ~ News Editor tpdeditor@crescotimes.com
CRESCO - Although it was just a formality, Brian Allen Fullhart was sentenced to life in prison without the possibility of parole, a verdict mandated by law, on Aug. 28, 2019.
Three of Zoanne “Zoey” Fullhart’s family members gave victim impact statements regarding her murder on or about Feb. 28, 2018 at 700 S. Elm St., Cresco.
Fullhart, who was found guilty in Howard County court on July 25, was given the first opportunity to make a statement.
Addressing the family, he wanted to give an apology. “I know it’s not good enough. I pray that someday you might forgive me. I wish every day that I had her back. I’m sorry.”
It took a few moments for Zoey’s mother, Jo Olson, to find her courage. In part she said, “Zoey had an apartment with her son, and [then you showed up]. You beat her down mentally and physically. She was beautiful on the inside as well as the outside, and you are ugly on the inside and outside. You murdered my daughter and Token’s mother in cold blood.”
Zoey’s brother, Scott Olson, gave his statement. “I shouldn’t have to be doing this today. He took Zoey away from us and left us with an empty spot in our hearts. Enjoy your new family.”
Another brother, Kerry Olson, had a victim advocate read his statement, parts of which included: I don’t want to speak to you or see you. I have many fond memories of Zoey. Now you killed my sister in cold blood.”
Judge Linda Fangman, First Judicial District, reiterated the guilty verdict of Murder in the First Degree comes with a mandatory sentence of life in prison without parole. “That is appropriate. You picked up a gun, made your wife kneel in front of you and placed a gun to her head [and pulled the trigger]. Many would call that an execution. That makes you not eligible for parole.”
In addition to getting life in prison, Fullhart was also ordered to pay $150,000 to the heirs of Zoanne Fullhart. Fangman noted it was reasonable to assume he has no reasonable ability to pay that or any other penalties given to him.
In conclusion, the judge said, “I do hope you are sincerely sorry, and I hope you work on yourself while in prison.”