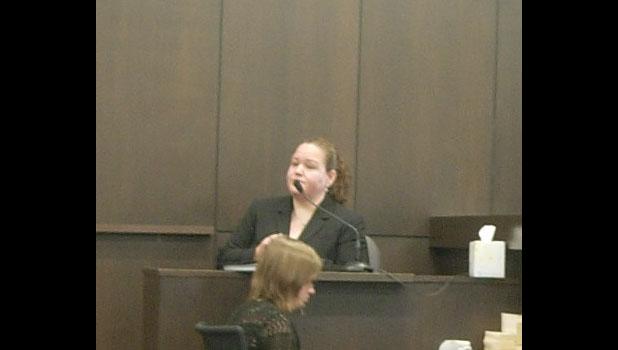 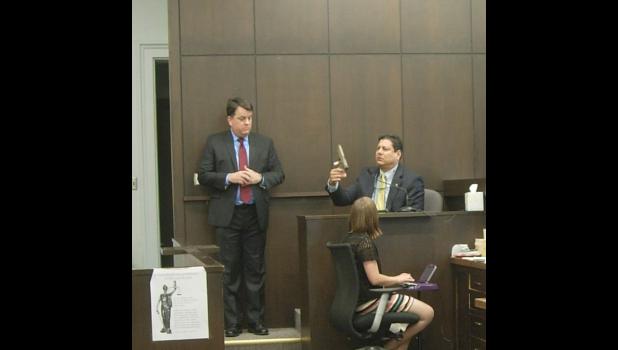 By:
Marcie Klomp ~ News Editor tpdeditor@crescotimes.com
CRESCO - The murder trial of Brian Allen Fullhart began on Wednesday, July 17, with jury selection starting at 9 a.m. Fullhart  is being charged with murder in the first and going armed with intent in the death of his wife Zoanne Fullhart on Feb. 28-March 1, 2018.
There were at least 80 potential jurors called for the trial, which is taking place at Howard County Courthouse. Four officers used a wand on each juror to check for weapons. Purses were also searched.
Fullhart was at the courthouse but not in the courtroom for jury selection. He had been escorted across the parking lot from the jail to the courthouse by two sheriff’s deputies, as well as Sheriff Mike Miner. In addition, Cresco police officers stood guard around the building as Fullhart was escorted to the top floor.
Background
Court documents say between the hours of 3 and 5 a.m. on March 1, at 700 S. Elm St., Cresco, Fullhart “did go armed with a dangerous weapon with the intent and did use that weapon without justification such weapon against the person of another and displayed such weapon while firing upon law enforcement.”
Cresco Police, Howard County Sheriff’s Department and area TAC team officers responded to a standoff situation with Fullhart. Negotiations were started.
During that situation, on two separate occasions, the defendant fired upon law enforcement with a compound bow. At least one of those times, he struck a police squad car.
Around 6 a.m. the suspect was taken into custody without incident. A deceased female was found inside the residence.
Courthouse was busy
The Sheriff mentioned besides a full courtroom on the top floor of the courthouse, a trial in front of a judge was held in the Board of Supervisors room and a wedding was to take place in the magistrate’s office.
Much of Friday, July 19’s testimony in the Brian Fullhart murder trial of his wife Zoanne was spent watching the video of Fullhart after he was taken to the Cresco Police Department, including his rampages and confession of killing his wife. They also heard from various law enforcement officers who were at the scene or spoke with witnesses.
Jurors learned Fullhart barricaded himself in the trailer with his dead wife. Very little contact was made in the four hours he was inside the trailer. He did shoot two arrows at the police.
He finally surrendered after 15 tear gas canisters were set off in the home.
At the police station, he admitted to having a drug problem.
Associate Medical Examiner Michelle Cattilier stated Zoanne Fullhart was killed by a single gunshot wound to the head.
Testimony by Iowa Division of Criminal Investigation Agent Scott Reger was continued until Monday, July 22.
Scott Brown, assistant attorney general of Iowa, who is prosecuting the case with Howard County Attorney Kevin Schoeberl’s assistance, asked questions of Reger to help explain what had happened on video of Fullhart after his arrest.
He noted Fullhart appeared to be talking to the walls. Reger said the room contained two two-way mirrors. Voices could be heard behind the mirrors, which distracted Fullhart.
“At times I was there to sit with him,” Reger stated. “I was there to calm him down.” At one point during the interview, Fullhart asked for some music and Reger used his Pandora account to listen.
At the end of the interview, the agent took swabs and clothes from Fullhart. He then went to the crime scene to collect more evidence, which took 6-7 hours.
Some evidence Reger found at the trailer included one glass pipe in the tool/smoking room, where the murder took place. Also in the room were two knives and an ax.
A white substance was found in the kitchen of the trailer and another pipe was found in the van. Reger did not know much about that evidence as he had not collected it.
Sabrina Seehafer, a DNA specialist with the Iowa Division of Criminal Investigation, was next on the witness stand. She found blood from Zoanne Fullhart on the hands of Brian Fullhart. She also found blood belonging to Torrey Willie on the 9 mm pistol.
Victor Murillo, a criminalist and firearms examiner with the state crime lab, was the last witness for the prosecution. He examined the Smith & Wesson semi-automatic pistol and found that it “functioned correctly.”
He then fired the pistol to retrieve samples from it. He compared the cartridge from the case with the unknown cartridge and found they had similar characteristics. He continued with his examiner and found the markings were similar.
Brown asked, “Based on your experience, have you rendered an opinion?”
Murillo said, “The cartridge case from trailer was fired form the Smith & Wesson.”
With no cross examinations from the defense, the prosecution rested its case. The trial is set to continue at 9 a.m. on Wednesday, July 24.