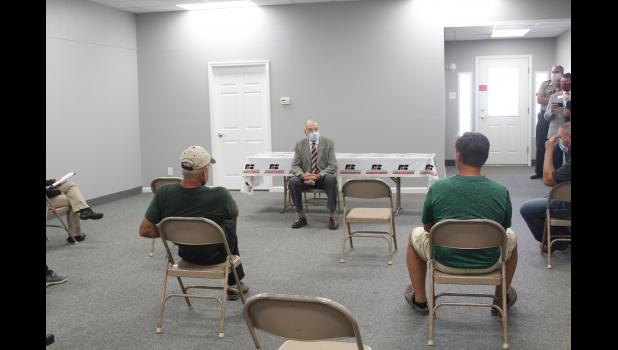 By:
Marcie Klomp ~ News Editor tpdeditor@crescotimes.com
CRESCO - Sen. Chuck Grassley was the first of Iowa’s two senators to visit Cresco in three days. He made his appearance at the Farm Bureau office on Monday, Aug. 31, while Joni Ernst visited Plantpeddler on Wednesday, Sept. 2.
Face masks were worn at both events. The wearing of masks was mentioned. Grassley replied, “I wear a mask because it isn’t hurting me. It’s a pain in the butt,” to which many nodded, “but I’m gonna do it.”
The senator opened the meeting by saying Congress will not go into session until next Monday through the first week of October, then two weeks off and back in November and December.
“We had open meetings until the virus hit. Now we keep them to 15 or so, like here at the Farm Bureau.”
He added he is a little behind on replying to his mail, but it is his intent to answer all the mail he receives.
In regards to trade, Grassley explained, “We’re mad at China because they weren’t honest about the virus, are violating human rights and trying to take over the entire South China Sea.” Despite that, two of the days of record sales to China took place this summer.
Neil Shaffer asked about budgets and COVID-19.
Grassley said the virus has caused panic. “For the first time in 240 years, the government shut the economy down. The stock market went from 29,000 to 18,000. It’s back up, but we’ve got to build confidence in the economy. We are building up the national debt. We’re going to have to freeze some things to balance the budget.”
Unemployment was also a topic of discussion. Grassley explained, “We were doing better on unemployment than ever before.” Nationally, it was at 3.5% in February. In April, it went to 14.7%. “By the end of the year, they are predicting it will be at 6.2%. We won’t get back to the [February numbers] for 2-3 years. At three-and-a-half percent, this president brought us to a new goal [for low unemployment numbers].”
Spiff Slifka of Economic Development said Howard County had been at 1.8% unemployment before the pandemic, and it was at 5.1% as of June. [The latest figures for July include 4.7% for Howard County; 6.6% for Iowa; and 8.4% for the U.S. in August.]
“We would encourage you to work on immigration laws.” Slifka added there are several businesses in Howard County that rely on immigrant workers.
Grassley explained the difficulty in getting a “simple” immigration bill through the process. Some legislators want it to be a comprehensive bill and then the left and right argue, so it never makes it far.
An obvious issue in this election year is the disagreements between Democrats and Republicans. “It is bad, but not as bad as people think.” He blamed the press and television. “You can approach people on a personal level.”
In discussing bi-partisanism in Congress, Grassley stated he has been in the top 10 for years and up to number five on the Lugar Center-McCourt School Bipartisan Index. The study put out by Georgetown University had Grassley at number 10 in 2019. From 1993-2018, Grassley was 14 for lifetime scores.
[Editor’s note: Google Lugar Index to check out various information on bipartanism]
On abortions, Grassley said, “Every opportunity I get to vote to support life, I will.”
The Senator commented on the Waters of the United States (WOTUS). “It took two-and-a-half years to get new regulations.” He said the way the law was written, 97-99% of the land in Iowa would have required farmers to get permits from the government to manage any amount of water on their land.
Healthy discussions were also held on ethanol, EPA and GAP waivers.
Grassley has served as Iowa Senator since Jan. 3, 1981. He is currently the chairman of the Committee on Finance. He also serves on subcommittees in the Committee on Agriculture, Nutrition, and Forestry; Committee on the Judiciary; Committee on the Budget; Caucus on International Narcotics Control; and Joint Committee on Taxation.