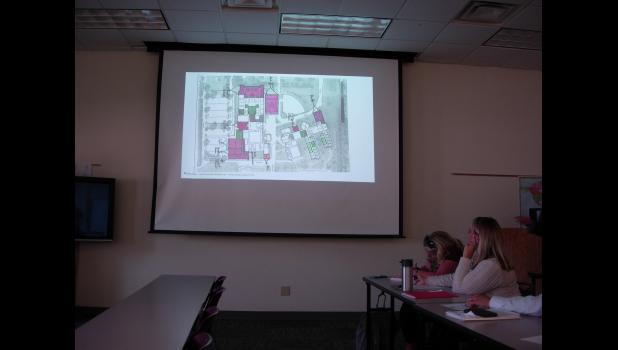 By:
Marcie Klomp ~ News Editor tpdeditor@crescotimes.com
HOWARD-WINNESH-IEK - Howard-Winneshiek Community School District Superintendent Ted Ihns gave an update to the school board and visitors on the school’s facility plans as released by DLR Group at the regular Aug. 19 school board meeting.
He said the estimated plan is a $23.6 million update and addition to the K-8 and high school buildings, although it could be done in phases.
Ihns stated meetings took place through the spring with the DLR Group.
He gave some background on the project, explaining one plan that has been looked at over the past several years is to connect the two buildings.
That was not cost-effective as most of the utility lines run right where the connection would be. The cost would run about $100,000 to move the lines.
The plan suggested by the DLR Group is to renovate and add some space. Some of the changes include:
• “People want a secure entrance to the buildings,” Ihns said. He noted How-Winn is possibly the only district in the area without a secure entrance. Currently, the office can let a person into the building, but from there, the visitor can go anywhere in the building without checking into the main offices.
The high school office would be moved to the entrance, which would be flush with the rest of the building, taking up the walkway to the doors.
For the other building, the office would also be added to the entrance area to better secure the building.
• A very big change would be altering the current K-8 building to housing PK-5. Preliminary plans are to move the preschool from Kessel Kids to that building. The preschool classrooms will be new construction to the front of the northwest corner of the present building.
Grades 6-8 would be moved to a new wing at the high school directly west of the current building.
• Another new space would be a larger auditorium to be built directly on the northwest side of the school. Ihns said when an event is taking place in the current auditorium, many times there is standing room only, leaving staff to find seating if they are able.
• The district has a space problem in regards to gymnasiums.
Three spaces are being utilized — the gyms in the high school, K-8 building and at the Cresco Fitness Center. Some students are having practices at 5:30 a.m. to get in their time.
A new gymnasium/ wrestling room/weight room wing would be added to the southwest corner of the high school. That also includes expanding the girls’ locker room.
• Right now, the Alternative Learning Center is in a trailer between the high school and K-8. A brick-and-mortar addition would be built on the northeast part of the high school.
PPEL Funds
Some renovations that will use PPEL (Physical Plant and Equipment Levy) funds are also part of the plan.
• Band room
• High school media center
• Home Ec Room
• K-5 office area
• K-5 classrooms
How much will it cost the average property owner?
Although the bond is for $23.6 million, Ihns said that is only an estimate. It could be less. He noted if only $10 million were to be used, on a $100,000 assessed home, the taxes would be $5.00 per month. That is $60 per year for $10 million or around $120 extra on a $20 million build.
For farmers on a 375-acre farm, it would be about $9.00 per month or $108 for a $10 million bond or $216 for $20 million.
Comparisons
Supt. Ihns said the high school was built in 1966-67 at a cost of $2.1 million. The K-8 building was constructed in 1992 for $5.4 million. “New Hampton just built a 5-8 middle school for $19.4 million,” he added.
Open Forum
Before Ihns’ presentation, two board members from Kessel Kids, President of the board Rachel Vsetecka and Treasurer Andy Ludeking spoke in Open Forum.
Besides being board members, they are also parents of children in the district.
Between the two, they spoke in favor of Howard-Winneshiek’s plans to enhance and upgrade its facilities but also wanted to bring up a few concerns.
Vsetecka mentioned the Kessel building is just 11 years old and has great support from the community.
Ludeking noted the two amazing playgrounds that are already established at Kessel Kids. The center is the largest child care facility in the county and supports 200 youth per year and 40 employees.
They both respectfully urged the school board to keep the preschool at the center.
The school board will be voting at the Sept. 16 meeting whether or not to put the bond on the Nov. 5, 2019 ballot. Look for more information in upcoming issues of Times Plain Dealer.