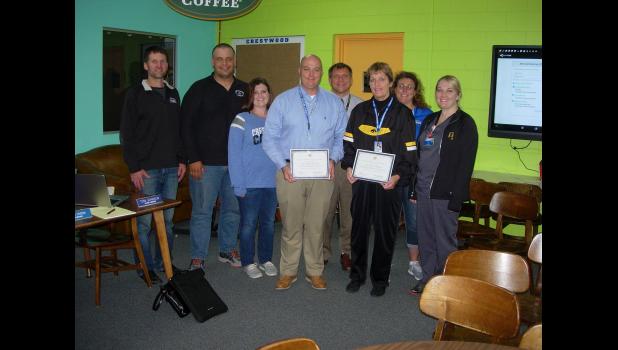 By:
Marcie Klomp News Editor tpdeditor@crescotimes.com
CRESCO - A quick review of last month’s Sept. 18 Howard-Winneshiek School Board meeting includes a change in time for board meetings. They will still be held the second Monday of the month, but will start at 6 p.m. instead of 7 p.m. for the 2017-18 school year.
In addition, Travis Squires of Piper Jaffray & Co. was present to talk about refinancing, which could save the district around $100,000 over the life of the 2009 Bond, when it is due Jan. 1, 2025.
The board has started the process to refinance and will invite Piper Jaffray & Co. to the Nov. 13 board meeting, to learn more about proceeding forward.
At the Oct. 9 meeting Superintendent Ted Ihns gave an overview of the district that will be made available to the public in the near future.
Some of the stats he brought up included special education, free and reduced students, buildings, certified enrollment and more.
~H-W is the third largest district geographically in the state with 434 square miles. It has 23 buses, eight vans, four SUVs, two cars and three pickups. Annual mileage is 212,830. Average cost per mile is $.65 with operating costs per pupil is $361.14.
~ As of Oct. 2, 2017 the district had 1,057 students with 41 in four-year-old preschool, 469 in K-6 (including transitional kindergarten), 214 in junior high (7-8), 356 in high school (9-12) and 10 in alternative.
~ Staff includes 99 certified, 42 non-certified and four principals/dean/director of special education
~ Average teaching years of experience—18; average of teaching years in district—14; and 29 percent of teachers have advanced degrees
~ The student population includes 141 (13.4 percent) in special ed., which is average; 57 (5.3 percent) in TAG; English Language Learners is under one percent; free and reduced lunch students is 42.3 percent, which is down from 48-49 percent a few years ago; and the shocker of 17 (1.6 percent) as homeless. It was explained homeless means living with grandparents, foster parents or others not a guardian parent.
~ The district, like many in the state, has seen a gradual decrease in students. Starting in 2007-08, certified enrollment was 1,339; FY09—1,299; FY10—1,297; FY11—1,290; FY12—1,271; FY13—1,252; FY14—1,231; FY15—1,151; FY16—1,096; FY17—1,091; FY18—1,049. Part of the most recent downslide is there are 30 fewer students in kindergartn this year than last year’s graduating class.
~ Expenditures include 41 percent for salaries and 18 percent for benefits, which Ihns said is average.
~ Ihns was very impressed with Cheryl Dickman and the nutrition program. In September the school served 17,488 meals and has about 98 percent of students eating a meal.
~ There are many pages of academic scores for all grade levels showing some shortfalls and others higher than the state and national averages.
• In addition at the meeting, Board secretary Clint Farlinger and Terese Jurgensen, Director of Special Education and Student Services, explained why the district needs to ask for additional spending authority for the Special Education deficit of $574,167.75 accrued in FY2017.
For special education, Howard-Winn spends what it needs to spend. There is no budgeting. In FY2017, the district had a total of $2.8 million in expenditures and only $2.2 in revenues, making the deficit of over a half million dollars.
The district receives approximately $6,714 per student from the state. Special education is divided into three categories, with each receiving a percentage over that amount. Level one requires a little extra help with the district receiving 1.72 times the base amount. Level two IEP (Individual Education Plan) students receive a little more help with the district receiving 2.21 extra. Level three is for students who need constant assistance with the district getting 3.74 times the base.
With the extra assistance and special programming the amount spent on some students exceeds the allotted reimbursements, which leaves a deficit in the fund.
Jurgensen stated how proud she is of the work her teachers do to help students. “We have the best teachers,” she said. She doesn’t like that some of the special education students go to other districts for schooling. “We can do a better job.” She added that by sending students to other districts, “we are paying for their teacher salaries.”
Jurgensen will tentatively give a presentation on a plan of action at the December meeting.
The district needs to ask for additional spending authority to allow for the money spent.
The board approved asking for spending authority.
It also approved spending authority for the English Language Learner deficit of $6,542.50.
The next board meeting will be Monday, Nov. 13 and start one-half hour early at 5:30 p.m. at the Crestwood High School Media Center.