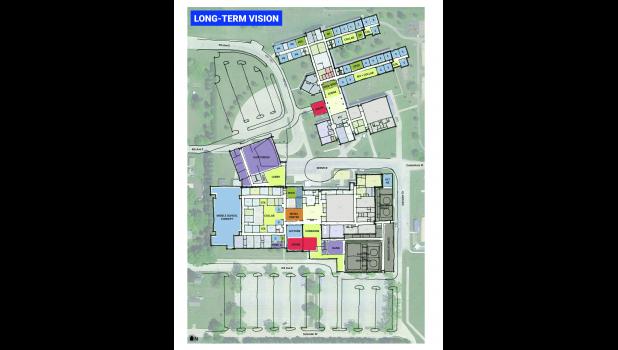 By:
Marcie Klomp ~ News Editor tpdeditor@crescotimes.com
HOWARD-WINNESH-IEK - An updated facilities plan was revealed by Howard-Winneshiek Superintendent Ted Ihns last week. The DLR Group made a few changes and clarifications to what was printed in the Times Plain Dealer in the Aug. 28, 2019 issue.
In addition, the Times had stated the preschool area would be a new build, when in fact, it will just be a remodel of several rooms in the current K-8 building.
Ihns explained why an upgrade of the school buildings is being looked at. “In the past few years, we did the outside areas — the athletic stadium and the baseball and softball fields. Now it’s time for the educational areas.”
There were several facilities committee meetings held in the past year where parents, community members, teachers, administration and even students (grades 3-12) attended. Ihns noted the committee members identified needs, as well as strengths and weaknesses.
These ideas were given to the DLR Group, and plans were revised a couple of times.
Right now, Ihns and other members of the Facilities Committee are taking signatures to be able to put a $23.6 million bond referendum on the Nov. 5 ballot. School board members will vote on whether to go forward with putting it on the ballot at the Sept. 16 school board meeting.
Key issues
• In this day and age, safety of our children is a major concern. Every school hour there are students walking in the open, between the two buildings. Mostly it is seventh and eighth graders who have some classes in the high school, but even kindergartners use the gym for physical education at the high school sometimes.
Moving grades 6-8 to a new wing at the high school would alleviate much of that.
In addition, moving the offices to the front entrances of the buildings will potentially  eliminate the number of visitors walking the halls without signing into the office.
• As with most upgrades, space is definitely an issue. The K-8 building is at 86% capacity and the high school is under-utilized. When the K-8 building was constructed in 1992, change was not figured into it. Since then, Ridgeway, Elma and Lime Springs elementaries closed, adding students to the building.
• A larger auditorium will accommodate those attending concerts and other events by giving more seating options, as well as allowing better viewing of the event. “We may even utilize it to be a teaching/learning area or a place to video school announcements.”
• The high school was built in 1966-67. Some of its features are still being utilized but are in need of replacement. This includes the media center chairs and the auditorium, to mention a few. Several years ago, the seating in the cafeteria was finally replaced.
Keeping up
with the Joneses
Having a complex that is state-of-the-art will be a plus in many ways. It will be a great selling point to entice families to move to the district. Ihns added, “Teaching is competitive. Many of the upcoming teachers are used to facilities like UNI has. We want our teaching spaces to be what student teachers are accustomed to.” They may choose How-Winn over another district because of what it has to offer.
Other districts have been having bond referendums over the past few years to make their schools more attractive to visitors, locals and possible transplants.
Southland in Minnesota approved a $19 million bond last year; Northwood-Kensett approved a $6 million bond in 2017; and Charles City did the same in 2014 for $19.2 million.
Ihns anticipates this expansion should last the district for 40-50 years. “We’re not looking to do this again. We want it done right.”
“There’s no fluff here,” the superintendent said of the proposal. “We’ve been good stewards of the people’s money. We’d like our interior areas to match our outdoor areas.
“My goal is to get out there and share information with all the communities and have members of the Facilities Committee there as well.”
In regards to the high school, where Ihns graduated in 1984, he said, “I was two years old when the high school bond referendum passed. I’m glad people thought enough about my education to pass it.” He is hoping those who have graduated from Crestwood since then and other community members will have the same foresight as their parents.
If the bond is on the ballot in November and passes, the project should be completed by the fall of 2022.