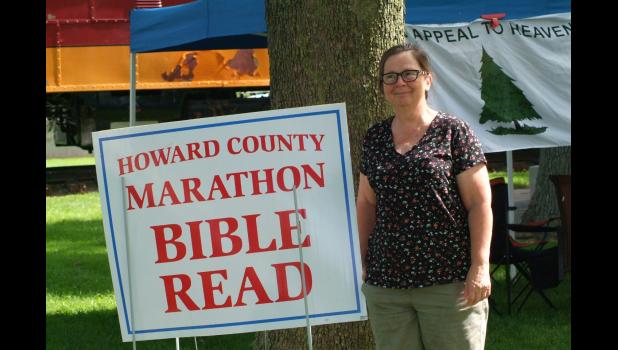 By:
Michael Egan / TPD Staff
CRESCO - The 4th Annual Bible Reading Marathon kicked off at 8 a.m. on the 4th of July at Beadle Park in Cresco. It is a non-political non-profit event meant to honor God by reading the whole Bible from cover to cover, non-stop, in hopes of blessings for the community and an appeal for Divine help in answering prayers specifically aimed at situations, needs, issues and such - in Howard County.
The event usually takes approximately 80 hours to read the 66 chapters of the Bible that can be well over 2,000 pages but usually less than 3,000 pages long (depending on the Bible), and includes participation from numerous partakers from around the community, some of whom are not seen at the park, preferring to remain anonymous and out of public view.
The event is actually a state-wide event that includes most of Iowa’s 99 counties, although not occurring at exactly the same time.
The symbol of this particular event is the flag that was the first flag used by early pilgrim settlers, showing the single pine tree and was actually adopted from the Iroquois people, who inhabited this land long before any European settlers came to what is now the Americas.
Ancient Iroquois legend speaks of a figure named Deganawida (the great peacemaker) who rowed around in a stone canoe and united separate tribes into a great nation.
He got them to put aside their differences in a better hope for all by burying the weapons they used in warfare against one another under a single great white-pine tree - thus bringing about a saying that lasts to this very day…‘Bury the Hatchet.’
The thread of finding a ‘peaceful solution in a better hope for all’ continues on and was used by George Washington (who actually fought to vie for a favorable  treaty) as well as Martin Luther King among some significant others – but was also a theme used by Christ himself when he said, ‘I have not come to take lives but to save them.’
Jesus Christ also said, ‘I have not come to bring you peace but to bring you a sword…’ The sword Jesus spoke of was a spiritual one.
And prayer is not only a physical act but is mainly a spiritual one.
The marathon reading of the Bible is a humble physical obedient act honoring God in hopes of encouraging a blessing for the community or county in which the Bible reading takes place by among other things – answering specific prayers that include individual dark areas, administrations, families and overall improvement for/from problems.
The words ‘Appeal to Heaven’ that are also found on the ‘single pine tree flag’ were used by George Washington, who knew the odds he and the early colonists were up against in their struggle for independence were so great that only with Divine help would they be able to be successful…and that still holds true today as to the issues in Howard County held up in prayer – some which are so great that only with Divine help can they be successfully overcome.
The Bible itself ends in a peace that lasts forevermore in a better kingdom to come...of course there are some individual requirements rooted in choice.
Of the participants in the reading one of the most significant ones was The Midwest Mission Bible Training Center located in Cresco. All 23 individuals who are a part of that Christ-centered residential program, seeking help with life controlling problems by seeking the Lord’s help, participated in the bible reading marathon, including Julie Aspenson, who went through that program back in 1999 and now heads up the Midwest Mission Bible Training Center.
“The Lord provides our needs through the hearts of his people…by individuals of the community as-well-as by churches,” Aspenson stated in humble thanksgiving, after she read from the Bible during the marathon early Saturday morning.
Of all those participating in the Bible Reading Marathon, none were more significant than Howard County residents and organizers Jimmy Sidebottom, Julie Haslerud and Duane Heit, who together traded off to keep up constant 24-hour participation.
“He’s never too late, He’s always on time…” Haslerud, one of the original organizers of the event now in its fourth year, stated. She said she was thankful to God for providing participation from individuals just when they are needed. Ironically, Heit showed up at that moment with some  cold, cut melon to share with participants during the hottest part of the day!
She added, “This is the ground I pray for,” she pronounced about Howard County. But she also partakes in events in other parts of the state. “Everywhere we go, we lift up the circumstance in that particular area or county in prayer.”
There will be a similar event happening on 7/14 beginning at 7:14 a.m. at the Howard County Courthouse based on Chronicles 7:14 which states…“If my people, which I called by my name, shall humble themselves, and pray, and seek my face, and turn from their wicked ways; then I will hear from heaven, and will forgive their sin, and will heal their land.”
Simultaneous participation will occur in Georgia, Missouri, Alabama, Kansas and some areas in Africa including Zimbabwe, Kenya and Nigeria.
On the table in front of the simple podium from which the Marathon Bible Reading took place, there were among other things; a donation jar with a few bills, a Bible, a schedule of individual participation and a coffee mug holding a bunch of writing pens that simply stated…“Believe.”