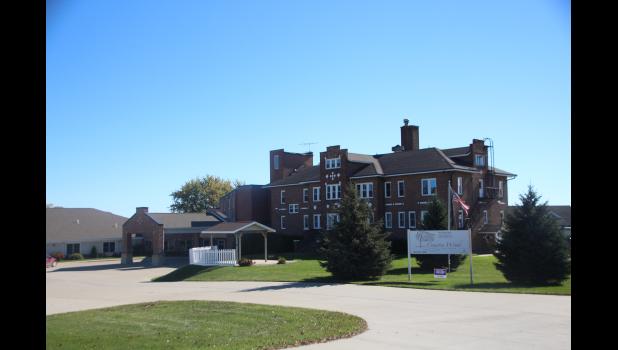 Howard County Board of Supervisors allocates $200,000 to Country Winds

By:
Marcie Klomp ~ News Editor tpdeditor@crescotimes.com
CRESCO - “That’s what these dollars were meant for,” said Howard County Board of Supervisors Chair Pat Murray.
At the Oct. 25 weekly meeting, the three Howard County supervisors, Murray, Joe Pisney and Dean Eastman, voted to allocate $200,000 of Howard County’s $1.7 million American Rescue Plan dollars to help out Country Winds Manor.
In last week’s Times Plain Dealer, it was reported the Donald Lundak Assisted Living (which currently has no residents) and Patty Elwood Centers were in danger of closing their doors. It wasn’t even certain if they could make payroll that week.
Robin Schluter, CEO of Regional Health Services of Howard County, and Spiff Slifka of Howard County Economic Development attended the meeting, hoping to get some help for CWM, and the Board of Supervisors stepped up.
Murray noted, “Of the $200,000, we’ve already given them $50,000, but when they need more, they need to give us a progress report. We’d also like to see how they are getting the capacity up. It’s still taxpayer dollars.”
The American Rescue Plan money was given to each town and county in the United States with quite a few restrictions. It was meant to help out with COVID expenses and needs to be spent by 2024.
“Helping Country Winds Manor is a perfect example of how this can be spent,” Murray added. “It tears at your heart. There are 15 clients in the Patty Elwood Center (a dementia care facility) and 44 jobs at stake.
“Patty Elwood cares for a population that needs a lot of care, and a lot of care costs money.” In addition he said a lot of great people have been trying to keep the facility running.
Schluter explained the hospital’s motivation in getting involved. “The Board of Trustees and myself had a discussion and felt it was an urgent situation, and helping fell within our mission.
“COVID has hit many businesses really hard. It is difficult to close the door of a restaurant, but it is also hard to close the door on someone’s grandmother.”
As soon as Schluter heard there were financial problems at CWM, she raised a flag, and people stepped forward.
A GoFundMe Page was formed and donations were asked for.
Murray stated “Jason Passmore and the group at Howard County Economic Development are looking under every rock for ideas and ways to get money.”
Schluter told employees at Patty Elwood Center, “You should feel blessed. The whole community has stepped up to take care of you, because you have stepped up to care for our most vulnerable citizens.”
For now, and hopefully for a long time to come, CWM is keeping its doors open.
Schluter commented, “We still have a lot of work ahead of us, but with help from the community, we avoided an imminent crisis.”
If you still want to help out, use the GoFundMe Facebook page or send a donation to CUSB Bank in Cresco for Country Winds Manor.