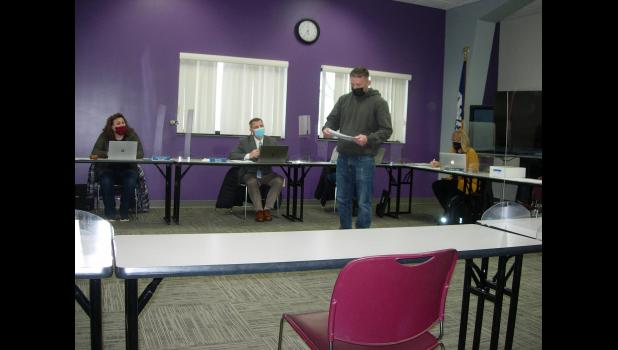 —How-Winn superintendent gives his monthly report
By:
Marcie Klomp ~ News Editor tpdeditor@crescotimes.com
CRESCO - “It’s hard to believe that it has been one year since the shutdown. COVID still has a piece of us, but I’m thankful we have had classes this school year except for a 10-day period before Thanksgiving break,” said Supt. Ted Ihns.
He addressed the school board at the Howard-Winneshiek CSD regular meeting on March 15.
He explained the revised calendar for the remainder of the 2020-2021 school year. “For this school year, we had 79.1 hours built in. As of today, we still have 48.3 hours available to meet the state minimum of 1,080 hours.” As it stands, March 16 was another snow day, which lowered the hours to 41.6.
E-learning is an option if needed, but Ihns said, “People have said, ‘Let a snow day be a snow day.’ They want the learning to be in-person.”
The year has gone quickly as there is just nine weeks of school left and eight weeks before graduation.
Enrollment numbers for February were 417 for TKG-6, 196 for grades 7-8 and 386 for grades 9-12, for a total of 1,049.
He concluded his report by thanking the school community for the passage of the Physical Plant and Equipment Levy vote on March 2.
• In other business, Trevor Fouts approached the board about getting approval for him to change zoning on his property across from Kessel Kids from R2 to R3.
The change would allow him to put up 24 high-end apartments rather than 12, which is what the zoning permits currently. He explained higher-end is for three bedroom/two bath, two bed/one bath and one bed/one bath apartments that would rent for no more than $1,000.
Ihns reminded board members that Howard County has a housing shortage. If some homeowners are thinking of down-sizing, they could move into the apartments, and their homes would be available for larger families.
Fouts said, “There are not many places to build something like this. It is one of the last resorts here in Cresco.”
He needs 50% of the neighbors to sign off on the rezoning request. The school board will vote on the issue at the Tuesday, April 13 (a change in date from the third Monday) meeting.
• A resignation was received from Lynn McCormick, Head Boys Varsity Basketball Coach. Hires included Justin Denner, Head Varsity Football Coach; Cassie Lichty, Head Cross Country Coach; Karen Steffen, Assistant Cross Country Coach; Trish Hartman, Assistant Varsity Volleyball Coach; and Courtney Rogne, Jr. High Girls Track. There were also 11 open enrollment applications.
• Ann Smith and Chris Rogne gave a report on SIAC (School Improvement Advisory Committee). Members of the group make recommendations to the board regarding major educational needs; student learning goals; long-range and annual improvement goals; and much more.
The next meeting will be held on Monday, March 29 at 6 p.m. in the Elementary/Junior High Discovery Center.
If anyone is interested in being a member of the committee and helping out the district, call either Smith or Rogne at the high school office, 563-547-2764.
• Michelle Martinek, representing Hacker, Nelson Co. explained parts of the FY2020 Audit Report. The report will be available on the school’s website in the near future.
Martinek noted the audit went smoothly, “even though we were on-site only one day. This is the third year we’ve been auditing Howard-Winneshiek, and there were no big changes.”
Some of the items the company found included segregation of duties for employees handling finances, which is hard for smaller companies; one student missed in certified enrollment (which was corrected with the state); and 28 students having a lunch deficit of over $30.
• A work session will be held  regarding an addition between the junior high and high school on March 22 at 2 p.m. at the District Office.
• The 2021-2022 calendar was approved. It is pretty much the same as the current year. School will start on Monday, Aug. 23 and finish a week before Memorial Day if there aren’t a lot of snow days.
• For 2021-2022, there was no change for elementary and secondary registration fees.
• The board voted to have Hacker Nelson be the auditors for FY21, FY22 and FY23.
• The 2021-2022 curriculum guide for the high school was approved. Rogne noted there are over 100 choices for high school classes and 51 for dual credit with NICC.
• The board approved the 2021-2022 UNI Cooperative Agreement for Pre-Service Clinical Placement, allowing student teachers from the college.
• Category One-Data Transmission and/or Internet Access Service Agreement, effective July 1, 2021, for 36 months, at $1,911 monthly, was approved.