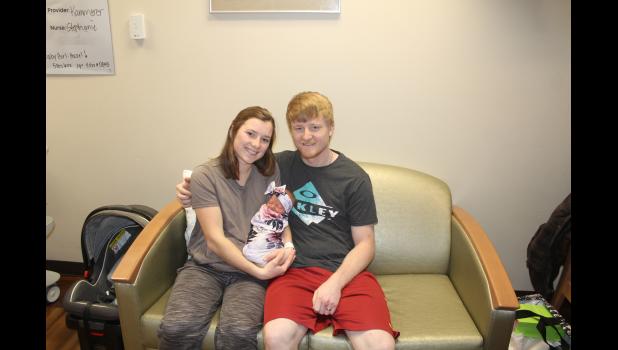 irst Baby of 2022!
By:
Marcie Klomp ~ News Editor tpdeditor@crescotimes.com
CRESCO - Newborn Hazel Lynn Flattum was so excited to meet her family face-to-face, she made her appearance a month early, just eight hours, 43 minutes into the new year!
The little princess joins her parents, Jake and Brooke Flattum and big brother Liam (22 months) of Lawler. She was five pounds, six ounces and 19 inches long.
The two pregnancies were not much different, except, “She wasn’t a fan of tractor rides. She didn’t like the bumps. Liam loved it and still does.”
On Dec. 30, Brooke said she was feeling sick with the flu. She was feeling some pains, but just thought they were Braxton Hicks contractions.
“The next day, she was feeling better,” added Jake. “Then she woke me up at 4:30 in the morning saying it was unbearable. When we got to the hospital, she was already at 5-6 cm. She was born shortly after they broke Brooke’s water.”
Liam was also early, about three weeks, so it wasn’t a surprise that Hazel came early. “I was hoping it would be a little later, (She was due on Feb. 2.) but she is perfectly healthy,” explained Brooke. Big brother was small as well at five pounds, nine ounces.
What wasn’t a surprise was the gender of their bundle of joy. The couple explains that after an ultrasound, the gender was put in a sealed envelope. “Jake’s mom, Jenni, was in charge of getting the right color.”
Brooke is a farm girl to the core. “The reveal was before harvest. We sent a big bag through the auger, and it sprayed out pink at the end. The first time we unloaded, we saw pink again!” When her dad cleaned out the combine, it was still in there.
How did the couple settle on the name Hazel Lynn? “Honestly, it just came to me one day. One day, I just knew,” noted Brooke.
Jake agreed. “It sounded right.”
Lynn is both Brooke and Jake’s mom’s middle name.
Looking down at her daughter, Brooke said, “I’m the farm girl. I’m so happy we can raise our family on the farm as well.”
Jake works at CaptiveAire in West Union.
Liam was very excited to meet his little sister. Grandparents Chris and Diane Hoey of Lawler and Billy and Jenni Bearman and Darin Flattum of New Hampton were also excited to see their second grandchild.
When they got home, the couple planned to have Hazel in their room for six months or so and then will move her to the nursery.
The couple was appreciative of the OB department. Brooke noted, “The facility is really nice. I’m thankful for the staff. They were really nice.” Hazel was delivered by Dr. Kammerer and nurses Leigh and Jessica.
Jake added, “They knew what they were doing.”
Those giving gift certificates or Cresco Chamber Dollars to the first baby of the year include CUSB Bank, Regional Health Services of Howard County, Plantpeddler, Dough & Joe,  CIA Insurance, Quilter’s Garden and Fireman’s Inn.
Businesses that gave gifts were O’Henry’s Stitches & Prints, Fareway (diapers), Holstrom’s Gift & Jewelry (silver spoon) and Times Plain Dealer (year’s subscription to the newspaper).
Congratulations to the happy family!