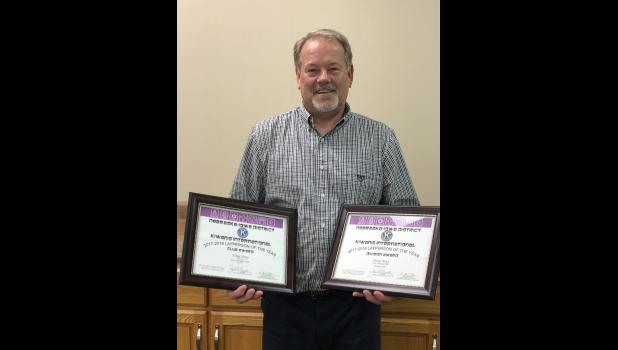 Kiwanis Layperson of the year

Cresco - Doug Berg of Cresco is the local Kiwanis International 2017-2018  Layperson of the Year Club and 2017-2018 Nebraska-Iowa District Kiwanis International Layperson of the Year.
Berg was given the awards at the Cresco Kiwanis regular October meeting.
He has held most offices in the local Kiwanis club and volunteered to be president for two years, rather than the normal one, when he was elected president.
According to long-time Kiwanis member Jerry Wilson, Berg has helped or chaired several fund-raisers including football tailgates, Moo-Mobile at the Mighty Howard County Fair, the Mother’s Day brunch and the circus that comes to Cresco every two years.
And it is more than just Kiwanis-sponsored events and organizations Berg is part of. Clint Farlinger stated, “I met Doug several years ago when our sons were in Boy Scouts together, and I was immediately struck with his willingness to volunteer at every opportunity. He was routinely the first volunteer to arrive, the last to leave and made every moment in-between count.” Both of their boys earned their Eagle Scout rank and Berg helped every step of the way.
In addition to scouting, Berg served on the Howard-Winneshiek CSD Board of Education for one term, worked as a past EMT, is an active member in the Dollars For Scholars organization, has coached, is a Master Gardener and is active at church.
Berg also partnered with Farlinger in providing homes for mentally disabled persons in the community after it was announced the county facility, which provided services to about 20 individuals, would be closed due to budget cuts and changes in Iowa Code.
Kelly Buehler noted in her nomination letter, “Doug possesses many leadership qualities. He is a highly educated person and is a perfectionist with tasks he gets his hands on. He is thorough in his thinking, willing to research, investigate and then follow through.”
His boss and friend, Jeff Slifka at Featherlite said, “Competitive, passionate and humble are three great traits that come to my mind when I think about Doug.”
Slifka sums up Berg. “Throughout all of this, Doug remains very humble, always thankful for everything he has and always willing to help out anyone at any time. Doug is the person everyone needs as a friend.”