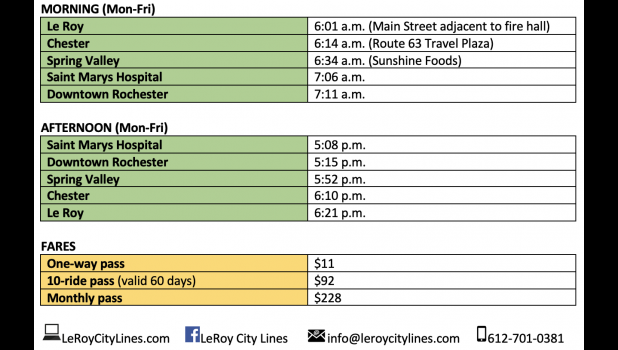 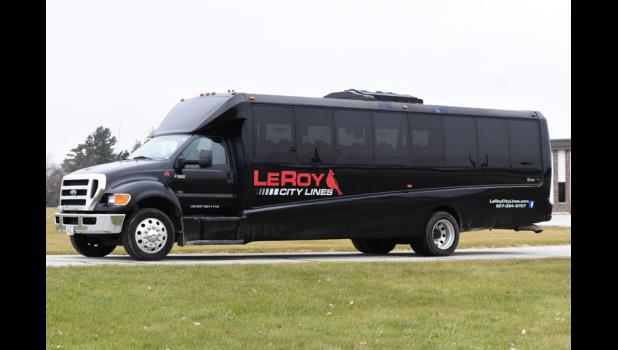 —March 1 start adds Spring Valley as pick-up spot
By:
Axel Gumbel, axel_gumbel@hotmail.com
LE ROY - Nearly a year after the LeRoy Economic Development Authority (EDA) suspended LeRoy City Lines commuter service to Rochester due to the COVID-19 pandemic, buses will start rolling again March 1. But the weekday service will look a little different with a new route, new fares and several measures to keep passengers safe during the pandemic.
New service
The EDA’s new commuter bus service will pick up passengers in LeRoy, Chester, and Spring Valley, while there will no longer be a stop in Grand Meadow.
“It’s hard to make a decision like this,” said Axel Gumbel, who is a member of the EDA and helps manage the day-to-day bus operations. “We spent much of last year surveying passengers and others to see what our numbers would be like once we offer commuter service again. Unfortunately, with a lot more people working from home, bringing back our service as it had existed wasn’t financially feasible.”
He adds that an initial idea to possibly offer a stop in Adams no longer produced the interest level it had a year ago. However, the EDA has been trying to secure another pick-up location near the intersection of Highways 16 and 63 but has been unsuccessful so far.
While Gumbel says that the interest from Spring Valley passengers won’t be certain until passengers start purchasing tickets, he says the EDA is optimistic about its prospects with the new stop, considering the number of people who have contacted the bus service in recent months to ask for a stop in Spring Valley.
The interest has likely in part been motivated by the fact that Rochester City Lines, which has served Spring Valley for many years, has not announced a return of service to date.
The new route, which will be served once a day until additional drivers are found, will run from LeRoy to Chester, then up Highway 63 through Spring Valley and on to St. Marys Hospital and downtown Rochester. The use of Highway 63 will be a major advantage, Gumbel says, especially in the winter months, when wintry road conditions can lead to schedule delays.
New fares
One factor in the new commuter bus service model, and arguably a point of uncertainty, Gumbel says, will be the new fare structure. Late last year, Mayo Clinic announced it will no longer offer a commuter bus subsidy to employees. The subsidy had paid roughly 60% of passengers’ fares.
“That means a significant fare increase for previous Mayo passengers,” Gumbel says, “and we want to stress that we have not added any increases on top of that, because we know this will be a big adjustment for some of our riders.”
The EDA hopes that the convenience and comfort of riding a LeRoy City Lines bus to work will translate into ticket sales. Nevertheless, the group will keep a close eye on the sustainability of the service.
The City of LeRoy continues to support LeRoy City Lines with an annual subsidy and is also currently covering the payments on the three buses, since the EDA has had near zero bus income since the start of the pandemic.
“We are trying hard to make it work for all involved,” Gumbel says. “The quality of our bus fleet is perhaps unmatched in the region. It would seem foolish to not try to get back into the game.”
He adds that the charter side of the bus service, which had been an unexpected, positive development since Le Roy City Lines began service in 2016, has also shown strong signs of a resurgence, as the pandemic shows signs of waning.
Pandemic protections
Much of the EDA’s work to prepare for the re-start of commuter bus service involved making sure it can do so legally and safely during the pandemic.
After many conversations with officials from the Minnesota Department of Health and the Department of Transportation, the EDA developed a Pandemic Preparedness Plan and will implement safety measures, as well as cleaning routines on its buses to protect passengers and drivers.
Masks will be required at all times while on the bus with no exceptions. LeRoy City Lines also will operate with limited capacity and block off certain seats to establish social distancing.
While many previous passengers, especially Mayo employees, have said that they have already been fully vaccinated, a COVID-19 vaccination is not required to use commuter service. However, anyone experiencing symptoms or feeling ill should not board a bus. Buses will also be sanitized with a special fogger after each trip.
When buying their first commuter service ticket, passengers will also need to sign a COVID-19 liability waiver, which has become common in the industry.
More information about schedules and fares can be found in an ad elsewhere in this paper, as well as on www.leroycitylines.com and on the “LeRoy City Lines” Facebook page.
EDITOR’S NOTE: Axel Gumbel, who wrote this article, is a member of the LeRoy EDA