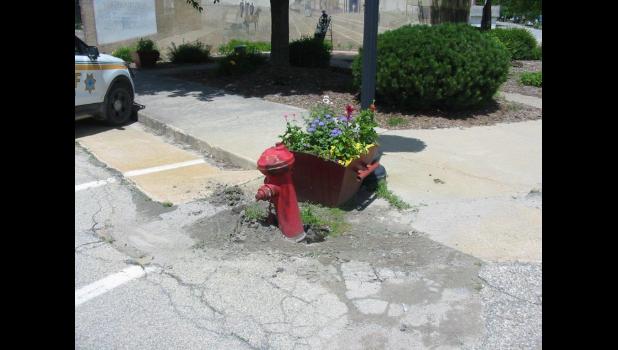 LIME SPRINGS - On Thursday, June 25, at 12:32 p.m., the Howard County Sheriff’s office received a phone call from the City of Lime Springs in regards to a fire hydrant that was struck by an unknown vehicle at the intersection of Main St. and Willard St., near The Mill House.
The Sheriff’s office was able to obtain video footage from the security cameras the City and Sheriff’s Department had installed about two-and-a-half years ago at that very same intersection.
It was determined that at 10:38 a.m. on June 25, a delivery truck owned by Johnson Brothers of Iowa out of Johnston, Iowa came from the north and took the corner too sharp, side-swiping the hydrant. The driver parked his truck and checked it for damage but did not bother to check the fire hydrant or report the damage to anyone.
This accident caused over $7,000 in damage to the hydrant. Johnson Brothers of Iowa was notified by the Sheriff’s office of the incident, and the company is cooperating with the City to pay for the damages.
The hydrant was replaced but was moved further from the street.
This is not the first time these cameras have helped solve a crime. Most notable was the bank robbery that took place Sept. 3, 2019 at the CUSB Bank branch in Lime Springs. The cameras were able to capture the license plate of the vehicle the bank robber used to get away. The suspect was captured in two-and-a-half hours at his Austin, Minn. home.
Just last week, Luis Angel Vega, pled guilty in federal court to bank robbery and using a firearm during a violent crime.
Other incidents that were solved because of the cameras include a theft from the library drop box, the theft of a package from a porch and a pedestrian that was nearly run over intentionally by a vehicle.
Deputy Tim Beckman noted the cameras are only viewed if there is an incident.