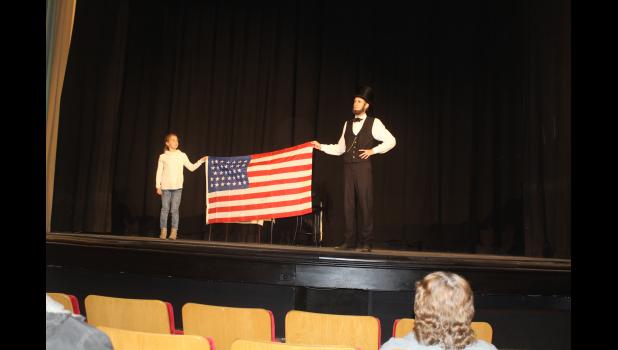 Lincoln steps out of pages of history

—The late Pres. reviews his life with locals
By:
Marcie Klomp ~ News Editor tpdeditor@crescotimes.com
CRESCO - The area was in for a treat on Friday, Oct. 16, when one of the most beloved presidents in history visited the Cresco Opera House.
The program was sponsored by Cresco Public Library, and director Cynthia Kay introduced the 16th President of the United States. Abraham Lincoln (portrayed by Kevin Wood) showed his humor right away by saying, “Some people have asked me if I would run again! Back in my day politics was nasty. I’m sure it’s not like that today.”
He brought more laughter when he noted the media was very partisan in the 1860s, with each newspaper leaning toward one party or the other. He recalled a Democratic paper saying what a poor speech the Gettysburg Address was, while a Republican paper praised the president and the poignant words he spoke on Nov. 19, 1863. “I’m sure the media of today is much more objective.”
“I went to Gettysburg to dedicate a cemetery for those who fought.”
Lincoln offered that being in Iowa was nice as he had some land here that he was given as payment for serving in the Black Hawk War.
He then gave some background on his life. At the time of his birth in 1809, the flag had 15 stars and 15 stripes. He was born in Kentucky and stayed there until he was seven. The family then moved to Indiana. When he was 21, his father moved further west . . . to Illinois, and he followed the family.
“During that time, I went to five different schools for two months each. I had about 10 months of formal education,” Lincoln announced. “But I had a passion for reading.” He read the books his mother and step-mother had. He went to neighbors’ houses to borrow books. He even found some law books in the bottom of a barrel he purchased. He read those law books and papers, took the test for the bar and was an attorney at law. “You’re never too old to learn,” he said.
At the age of 14, Lincoln’s father hired him out to the neighbors and took all of his wages, $6.00 per month, until he was 21.
“At the age of 19, I saw human beings being sold. I didn’t like it,” the former president stated.
When he was of age, he moved to the huge town of Springfield, Ill. It had a population of around 2,000. That was where he met his future wife, Mary, who was a Whig and talked politics.
Some background information Lincoln gave on politics included how to keep the peace between the free and slave states. The solution was for each slave state, there had to be a free state, so by the 1840s, there were 15 free and 15 slave states. Iowa was the 29th state.
Other solutions being discussed included drawing a line across the middle of the United States, with southern being slave and northern being free. The line was between Iowa and Missouri.
The Republican Party came into existence in 1854 to combat the Kansas-Nebraska Act (which proposed expansion of slavery into the territories). Lincoln joined the Republican Party for that reason.
In 1856, James Buchanan defeated John C. Frémont for the presidency.
In 1858, Lincoln ran for Illinois Senator and lost to Stephen Douglas. “Douglas said let the people choose [whether to be free or slave]. But he didn’t want the slaves to vote. Isn’t that Democracy? I gave speeches against slavery.” At the time, one-eighth of the nation’s population was slaves.
They ran against each other again in 1860 . . . for President of the United States. Lincoln ran on the platform “I can’t stop slavery, but I will fight to keep it from spreading.” When he won the presidency, seven states seceded.
By the summer of 1861, 11 of 15 slave states had seceded. Washington, D.C. was surrounded by slave states. Virginia had already seceded. If Maryland did as well, the nation’s capital could be taken, so Lincoln put the state’s legislature in jail so they couldn’t meet and vote to secede.
“Wars are expensive. We needed money. I went to some banks in New York to borrow it. They said they would . . . for 36% interest! So how do you get money? You make it. Have you heard of green backs? That’s what we made.”
It was at that time that Lincoln established the Secret Service to find counterfeiters. “It took three assassinated presidents before it became what it is today,” he observed.
All-in-all, 600,000 soldiers died in the Civil War.
During his presentation, Lincoln gave some correlations between his presidency and the election taking place today. When asked about filling the Supreme Court, he said the same thing happened between his two terms. Chief Justice Roger B. Taney passed away on Oct. 12 after serving for 28 years. “It was 27 days until the election. Did I want to wait to appoint the next justice? I waited because Congress wasn’t in session. I chose Salmon P. Chase, who was approved the same day.”
He was asked about his son, Robert Todd, who was the only son of four to reach adulthood. Lincoln noted how proud he was of him. “He wanted to join the Army, but Mary said ‘No.’ We had already lost two sons (Eddie at age four and Willie at age 11). She finally agreed, and Robert was made a member of Ulysses S. Grant’s staff. He was there when Lee surrendered.
“In fact, we were talking about that [this morning] when he came to have breakfast at the White House. We later left for the theatre. He is courting Mary Harlan, who is from Iowa. I believe they may marry some day.” (Robert and Mary were wed in 1868 and had three children.)
It was a great program with audience members asking questions and participating. One thing is certain, Lincoln’s visit to the Cresco Theatre & Opera House had a much better turnout for the man who fought to end slavery than his last trip to a theatre, on April 15, 1865.