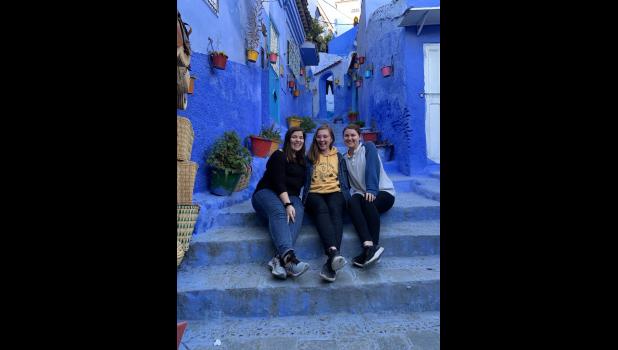 —Katie Huhe was studying in Spain and had to get home!
CRESCO - Here is the story of Katie Huhe who was overseas when the pandemic was in its infancy. Here is the story of making it home safely in her words:
I was studying abroad in Granada, Spain through Central College of Pella, Iowa. There was a group of 10 girls abroad at this location — five from Central, three from Monmouth (Ill.) College and two from Valpo (Valparaiso, Ind. College).
I had arrived on Jan. 11 and received an e-mail on March 13 that we were no longer able to stay in Spain. Prior to my school making the decision to pull us, both Monmouth and Valpo had decided to bring their girls home.
Getting home was a stressful situation because we would start to book a flight but then a piece of the trip wouldn’t work.
For example, I was supposed to fly from Granada to Madrid, Madrid to Chicago and then Chicago to Rochester. About nine hours before my flight to Madrid took place, we received an e-mail saying our flight was cancelled.
Driving to Madrid was going to take five hours. Within about 20 minutes, we found a bus that was going there. I was now leaving at 1 in the morning.
We didn’t have any other hiccups, but we were definitely nervous to try getting back because news updates continually talked about closing airports.
I got back into the U.S. on March 16, and customs and CDC only took 30 minutes, rather than what the media was showing was taking anywhere from 4-7 hours. Upon arriving to Rochester, my mom had dropped off my car, and I was responsible for driving home and getting myself situated at my sister’s apartment for the next two weeks. Prior to this, I hadn’t even had the chance to visit my sister’s apartment.
My family had filled my car so I wouldn’t need to stop for gas; I had groceries and all the essentials.
I stayed in quarantine for the next two weeks. My friend, who was studying abroad with me, stayed with me so she could keep her distance from others as well. No one else was allowed in the apartment, and we didn’t leave. My family dropped off groceries during the second week. The procedure for that was they would drop it off, leave, I would wait a few extra moments and then grab the groceries and bring them inside.
We did go a bit stir-crazy at day 9-10. We FaceTimed some of the other girls just about nightly. We did puzzles and at-home workouts. We utilized Netflix Party, and I did some prep work for my Resident Advisor position and began making door decorations for the new school year.
Personally, I didn’t experience jet lag because I had read many tips about how to combat it. I was aware that even though I was driving at 11 p.m. our time, I was actually driving at 6 a.m. Spanish time. Right away, I had to think about the new time zone I was in and not compare to Spain.
I wasn’t scared while abroad because until about two days before the e-mail came in from Central, there wasn’t a single case in Granada, yet they had the whole country in quarantine-type situations. If you were out on the street, you’d receive tickets. This was back in early March for them. I’ve been in contact with my program directors still. They are still following the same procedures. They have special tickets for essential employees that must be carried at all times.
I was taking classes at the Centro de Lenguas Modernas (CLM, which translates to the Center of Modern Languages). It was about a 15-minute walk from my place in Spain. We are still taking courses online, so we have to be conscious of the time difference because most things are due at midnight, but Spain’s midnight. I’m taking  Spanish Sign Language, History of Art and Demographic and Geographic Changes in Granada. All my classes are still in Spanish. I have a grammar class as well, along with written and oral production.
At the beginning of the program, we had the chance to travel to Morocco. We stayed for three days. They were some of the sweetest people I have ever met. They were willing to let us ask questions about their religious views and how their culture worked.
I had the chance to also visit Paris and London prior to the pandemic really hitting. I had two more trips planned that were sadly cancelled, but I hope to get the chance to return in the future.
Huhe is not the only person to be missing out on travel. Many have had to change their plans due to the coronavirus pandemic. Just like her, we all hope that continuing with our lives will take place sooner, rather than later.