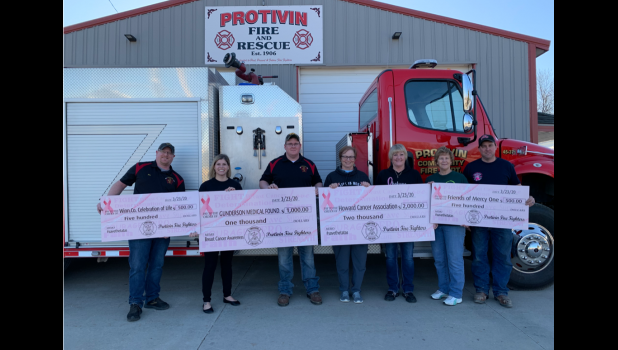 Looking out for one of their own

—T-shirt fund-raiser for Amy Moudry successful
By:
Marcie Klomp ~ News Editor tpdeditor@crescotimes.com
PROTIVIN - When friend and fellow firefighter Chris Shimek found out his Chief’s (Brad Moudry) wife (Amy) had breast cancer, he stepped up as only a true volunteer will.
He rallied the troops and organized a t-shirt fund-raiser with the intention of giving the proceeds to the family.
Amy recalled she was diagnosed on Dec. 4, 2019 and had a double mastectomy on Feb. 11 at Gundersen Lutheran in LaCrosse. She is recovering nicely at this time.
“The other firefighters agreed, and we ran with it,” Shimek said.
The Protivin Fire Department put out a plea on their Facebook page. “The Protivin Fire Department is a band of brothers, a family, and are always there for each other in times of need. Now it’s your turn,” the post said. It stated t-shirts were selling for $20. The navy blue shirts had a logo on front and Protivin Fire on the back with “Fire” in pink, a ribbon and fire house.
“We raised a good amount of money with great community support. We had many mutual aid fire departments from Cresco, Ossian, Waucoma, Lawler and more purchase the shirts, .”
On the first go-around, 300 shirts were sold. On the next order, there were about 100. For a town with a population of around 270, that’s a pretty good showing.
Jess Hansmeier is another who helped sell the shirts. She put on her Facebook page, “Protivin’s community is doing what they do best . . . helping support families in time of need! Get your t-shirt today and show Amy Moudry that no one fights alone.”
Shimek said, “We were hoping to raise $500 for the family, and we ended up with $4,000.” The firefighters decided to donate the rest back to the organizations that support them year after year in Howard, Winneshiek and Chickasaw Counties.
Then the Moudry family said they wanted their portion to go to the support organizations as well.
Protivin Fire Department decided to donate to four organizations, HoCA (Howard Cancer Association) — $2,000, Gundersen Medical Foundation — $1,000, Winneshiek County Celebration of Life — $500 and Friends of Mercy One-New Hampton — $500.
Shimek said, “The firefighters are so thankful for the support the area has shown for this project.”