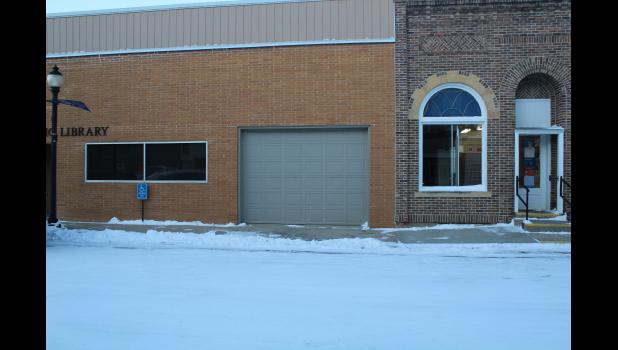 LS Library to take over parts of maintenance garage, office

By:
Marcie Klomp ~ News Editor tpdeditor@crescotimes.com
LIME SPRINGS - While looking over the consent agenda at the Feb. 2 Lime Springs City Council meeting, council person Kris McNamara  wanted verbiage changed regarding a portion from the January 2021 minutes that stated Council gave approval for Public Works Director Tyler Smith to paint “his” office (located in the City garage/library building), spending up to $150.
McNamara commented that Council had not called it “his” office. But when the Times Plain Dealer went back over the Jan. 5 audio, the council members all referenced it as Smith’s office at some point in the discussion.
Without verifying the audio account, Council voted to approve the minutes, while taking out “his office space.”
McNamara also gave a presentation on turning spaces of the maintenance department’s garage/office over to the library, as it has shown much growth in the past few years and needs the space. The library board wants the office currently used by Smith to be used for Library Director Janet DeVries’ office and the south portion of the garage to be remodeled into a board/activity room.
McNamara noted the issue has been tabled for six months. “In September I requested the library use the office.” She went on to say that in October, it was tabled again. In November council was told the maps and paperwork should all be located in one room, and in December different options were given.
“I contacted 12 other cities of the same size and asked what their public works director did.” She was told that many spent only 2-4 hours per month in an office. “Does that warrant the space?” she asked.
“I also talked to 10 cities the same size as Lime Springs. Only five had libraries.” The library would use the space 24 hours per week, compared with one hour per week for maintenance.
She said the land to the west of the library is not really an option as there are sink holes from the buildings that were torn down. It would take$30,000 to over $60,000 to fix that.
Options for the public works director would be to go in the storage area above the fire station, put an area in the Chamber room or truck shed or have a space in the community center.
Garage area
Right now the space in the south part of the garage, next to Main St., is used to store the lawn mowers and other equipment.
McNamara contended, the lawn mowers could be moved to a space between the truck and tractor in the garage. “I’ve measured this, and it would work.”
Council person Jennifer DeVries noted special programs would be held in the activity room. It would be used for events, tutoring and Alcoholics Anonymous meetings.
Chairman of the Library Board Eddie Miller added, “We’ve outgrown the library with everything that Janet offers. This isn’t something that came about last fall. It’s been slowly growing.”
He added, “This won’t cost the City a dime. We have the funds right now for remodeling.”
All of the arguments had some data behind it, but Smith did not think he was left enough space and would need some sort of new building to store the items being moved out. Items being displaced included public works director’s equipment, tools, machinery and office materials.
McNamara made the motion to give the office space and part of the garage to the library, with the office needing to be cleaned out by Feb. 15 and the garage by March 1. Kris Kraft voted no and Jen Smith (as sister-in-law of the PWD) abstained, while Amy Norton and Jennifer DeVries voted aye with McNamara.
• In other business from the meeting, there were no reports from the fire department or the Community Center.
• Becky Pahl gave the Library report.
• Jill Tibbals stated the Pool & Park Board was working on the budget.
• PWD Smith has been doing snow removal. The tractor was serviced. When asked how he liked the snow, he commented, “I like it. It’s fun.” He has help from the deputy maintenance personnel of Mitch Smith and Jerry White.
He also worked on a broken water main from mid-January, which was on Forest St. (across from the Earl Walker residence).
Council asked Smith to get the dump truck working.
• The council agreed to change the ordinance making utility bill payments due on the 12th, as is the current date, but not charge interest until the 25th of the month. Bills will be deemed delinquent on the 28th, when letters will be put on doors telling residents they have 10 days to pay or the water will be shut off.
• A budget hearing was to be held on Feb. 9.
• The next city council meeting will be held on Tuesday, March 2 at 7 p.m. at City Hall/Community Center.