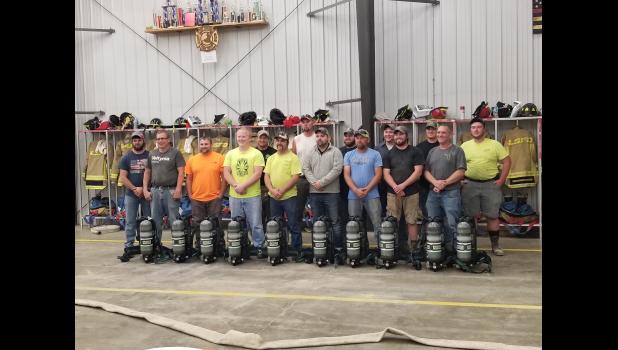 The old air packs for Lime Springs Fire Department were purchased in 2004 and typically have a 10-15 year life- span.
Chief Nathan Schwickerath stated, “They were becoming fairly unreliable, and we had purchased a number of used packs from other departments to replace packs that were deemed unfixable.”
He went on to say the department was able to make some substantial safety and user-friendly upgrades with these new packs. The old packs were rated at 30 minutes (2,216 psi) and the new packs are now rated for 45 minutes (4,500 psi). The NFPA airpack safety standard was increased from 2004 to 2018 (the latest standard).
Schwickerath explained, “We purchased 10 new packs and 15 new air bottles. Three of the 10 packs included on-board thermal imaging cameras, which will be utilized for search and rescue as well as finding the hotspots in a structure fire. In going to the higher pressure packs, we also replaced our aging cascade system, which is four larger air tanks that we use to fill the smaller tanks on scene.”
The department switched from Scott brand packs to MSA brand. “We now have the same style/brand pack as nearly all of our neighbors.”
The LSFD has been fund-raising for this large project for over four years. They received funds from multiple generous sources including firefighter fund-raisers; grants, including St. Paul Lutheran Mission Endowment and Howard County Community Foundation; and a donation from the LSFD Auxiliary.
Schwickerath said, “We chose to purchase all of the packs at once rather than purchasing over time to make sure all of them are exactly the same. This ensures every firefighter knows exactly what equipment he is putting on and can remain familiar.”