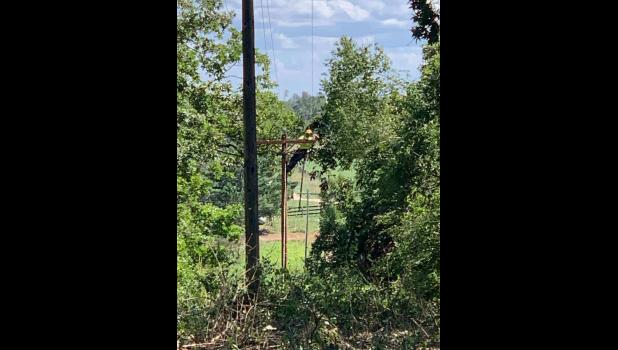 MiEnergy lineworkers get power on after derecho

CRESCO/RUSHFORD - When power is out, you go out to fix it if you are a lineworker. It doesn’t matter if you already put in your eight-hour day, or if it is in the middle of the night. It could be the Fourth of July in the sweltering heat, or Christmas Day with windchills well below zero. For 12 lineworkers at MiEnergy Cooperative, it doesn’t even matter that the power needing to be restored is hours away for members of another electric cooperative.
On Monday, Aug. 10, a derecho rolled across central Iowa leaving a path of destruction that leveled areas far and wide, including power line poles and wire. Shortly afterward, the Iowa Association of Electric Cooperatives communicated the need for lineworkers to assist with power restoration efforts. At its peak, about 58,000 members of Iowa electric cooperatives were without power.
By Tuesday morning, three two-person crews from MiEnergy were on the way to help their counterparts in east central Iowa. Jeff Henderson and Kyle Quam, both of Cresco, headed to Linn County Rural Electric Cooperative, of Marion, where they were reporting about 21,000 outages.
Steve Bronner, of Preston, Mark Dornink, of Spring Valley, Noah Manning, of Mabel, and Tony Rislove, of Rushford, were asked to help at Maquoketa Valley Electric Cooperative, of Anamosa, which was reporting 1,500 outages.
Power restoration continued as the days went by, but the challenges were tremendous. Two more crews left MiEnergy on Thursday, Aug. 13. Tom Hart and Clint Lickteig, both of Cresco, and Cole Kingsley and Andy Prinsen, both of Rushford, were bound for Linn County. By Friday, Aug. 14, all five MiEnergy crews were assisting Linn County, which was reporting 22 of 29 substations down and 11,200 outages. On Saturday, another crew of Kraig Johnson and Ron Stika, both of Cresco, were added.
Johnson and Prinsen both have been on crews that have assisted other co-ops in the past.
“The level of destruction and the large area it covered is something that we hopefully don’t witness again,” Johnson said.
Prinsen explained seeing “huge 345-kV transmission towers that were down, an underground cabinet tipped over due to a bump from a passing grain bin, and a Harvestore silo that buckled in the middle.”
“When requests are made by other co-ops, we always try to help. Some of the determining factors are our work schedule and future weather forecasts in our area,” says Chad Chaffee, MiEnergy’s vice president of operations in Minnesota.
Mike Walton, MiEnergy’s vice president of operations in Iowa, says lineworkers are asked if they are willing to go. “No one is forced to go help. They know it means working long shifts and being away from home,” Walton added.
Fortunately for others, MiEnergy and its predecessors Hawkeye REC and Tri-County Electric Cooperative have a history of being willing to help when the call comes.
When all was said and done nine days after the derecho, MiEnergy’s six two-person crews clocked in 1,228 hours restoring power.
Johnson and Prinsen know the members and lineworkers of the local cooperatives appreciate those who come in to help restore power.
“People would stop along the road to drop off water or Gatorade or food and shout out thank you,” Johnson said.
“They were very understanding, and when they do things like that it really gives you the extra energy to keep going when the days get hot and tiring,” Prinsen added.