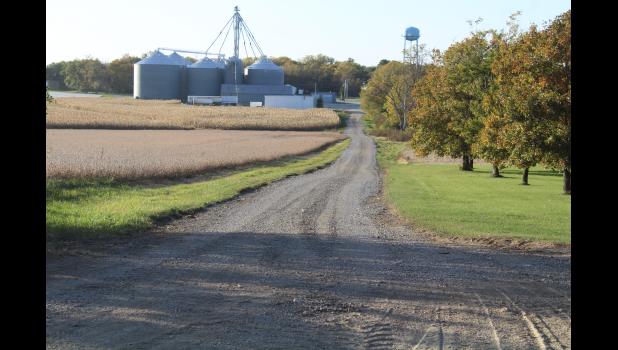 —E. Howard open for large loads instead of Merrill St. Bridge
By:
Marcie Klomp ~ News Editor tpdeditor@crescotimes.com
LIME SPRINGS - The City of Lime Springs has added rock to East Howard Street, the road that runs east/west from Dave Meyer’s to Donna Foote’s houses.
Public Works Director Tyler Smith hauled some of the crushed concrete from the pile that was crushed a few years ago. Dale Schwade of A&K Feed & Grain added some fill to give it more strength.
At the City’s Oct. 6 regular council meeting, members learned the road was being rocked because the bridge on the E. Merrill farm-to-market road is closed to vehicles over five tons.
Smith noted another layer of filler would help pack the road better. Council authorized him to get 5-10 more loads, depending on what was needed.
Smith also talked with Andy Lensing of Howard County Engineer’s office when he was inspecting the Merrill St. bridge. “I got a good schooling on how bad the bridges are. South Miller St. bridge is better than the Merrill bridge.” When they pounded on the Miller bridge, it was okay, but the Merrill bridge threw chunks with the pounding.
• In other City business, the Public Works Director reported he had passed the CPO class, allowing him to be certified for the pool next year.
He said the tree pile at the dump northeast of Lidtke Park keeps growing, “and I keep burning.” Eddie Miller, who lives beside the dump, commended him on getting the work done.
Ed Hampe and Smith replaced the pump in the water tower. There were some electrical problems, which were repaired. In addition, a new sump pump was needed, which Council authorized him to purchase.
• The office used by the Public Works Director and adjoining the Library was discussed again.
The City was written up for not having all the water, sewer and other paperwork in one place. It is currently in three different places, the office, the wastewater plant and city hall.  All the papers need to be in one place.
The Library would like to have a separate office (other than the circulation desk) for Librarian Janet DeVries.
The office would work for both departments. If the office behind Main St., that is attached to the library, would be given to the library, a different space would be needed for Public Works. It was mentioned that the space above the City Clerk’s office could be used. That space is accessed through the fire station. After the regular meeting, council members looked over that space and also looked at the space in the current garage/library area.
No decision has been made.
• This month, Council approved the proposal of adding part of York Township to the local fire district. Fire Chief Schwickerath explained, “The agreement is virtually the same as the one we have for Forest City Township. They rent fire protection for a flat yearly fee. We cannot charge more to York Township than we do Forest City, and the trustees pay Chester $1,710 per year for their part. That is what we will charge.
“The beauty is that our costs won’t go up. The population in this portion of York is very low, so there aren’t many calls. In addition, we charge $500 for a fire call.”
• The chief also mentioned the 10 new air packs the department received, along with 15 new bottles and a new cascade system. “These air packs work for 45 minutes, rather than 30 minutes. We tried them out, and we love them! We want to do more training before putting them into service.
• Richard Cottrell asked the chief about a firewall between Spring Ahead Learning Center and the old elementary, which Cottrell owns.
“The City was supposed to put up a fireproof wall between the two buildings.” The hallway between the two was to be taken down, but Cottrell had offered to let the hallway stay there if the City put in the firewall.
Smith will investigate and bring more information to the next meeting.
• No representatives were available from SALC. They were to meet on Oct. 12, and the City’s request for them to attend the next Council meeting will be addressed.
• Jill Tibbals gave the Pool & Park Board report. The diving board was taken off and placed on the side. “The Mennonite youth got the edging and wood chips for Brown Park.”
Heather Knutson was approved as a volunteer board member.
• Miller gave the library report.
• Some fire and utility bills were approved to be written off. City Clerk Jane Tibbals explained the money is not taken out of any account, because nothing had been collected from those bills yet. It just gets taken off the “to be received” list.
• The computer hard drive that had crashed was salvaged and returned to City Hall.
• The Community Center and Fire Station are being re-keyed.
• Building permits were issued to Larry Hart for a garage and Adam Munkel for a driveway.
• Help wanted ads for a deputy clerk and maintenance worker will go out in the utility bills and in the papers.
• There were complaints about a dog dumping in another’s yard and the poor condition of a house and yard on N. Miller St. Letters will be sent to the owners.
• The City signed an agreement with Howard County Public Health for the department to use the Community Center if there is a national or local disaster.
The next regular council meeting is Nov. 3. It will be held in the fire station.