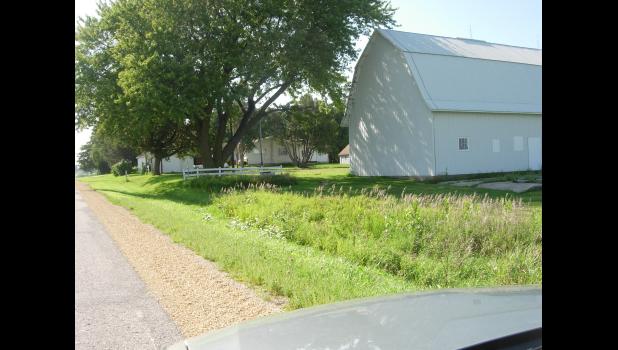 By:
Marcie Klomp News Editor tpdeditor@crescotimes.com
CRESCO - At its Aug. 14 regular meeting, the majority of the Howard-Winneshiek School Board was exposed to an unusual district asset for the first time  — the Folsom Trust.
School district attorney Joe Braun explained the trust. “Irene Folsom died in 2002. The trust came into existence in 2003.” It includes a farm in Howard County and another just over the border into Minnesota.
According to the trust, after 50 years, the assets go to the school district. Currently, How-Winn gets the profits from the farms, with the money going for scholarships. Last year, Dollars for Scholars received $17,000.
Part of the agreement was the trust would take care of Roland Folsom until he passed, which he did last year.
The trustee, American Trust & Savings Bank of Dubuque, wanted permission from the district to sell off the acreage where the house and buildings are located in Howard County, at the corner of A46 and Timber Ave.
The trustee felt it would be too difficult to maintain the property and look for a renter. The idea was to rid the trust of non-income producing property.
In addition, it was mentioned the trust plans to tile part of the agricultural land in the near future. This would use some of the profits at that time. On the other hand, there is no longer an expense in regards to Roland Folsom.
Board members all agreed to allow the property to go up for sale.
• In other business, after hearing the plea of Mary Schiotis to allow her to open enroll her son in an online course after the March 1 deadline, Supt. Ted Ihns recommended denying the request. Schiotis’ argument was that she has been home schooling her son and would continue to do so, even if turned down for the open enrollment request.
A motion and second were made by members Toni Johnson and Casey Vobr for denial. The vote failed by a 2-3 margin. It was then voted on again, allowing the request. On that motion, Johnson and Vobr voted nay, while Todd Hill, Cindy Yslas and Duane Bodermann voted aye, with the motion passing.
The rest of the consent agenda items were approved 4-1 (with Johnson voting nay, presumably due to another open enrollment after the deadline).
Items included minutes of previous meetings, payroll, bills, employment positions, other open enrollment requests (which also involved an open enroll out after the deadline) and financial reports.
Resignations included Keri Schatz, Public Relations Specialist; Galen Fye, Bus Driver; Megan Matt, Associate; and Monica Zapotocny, Food Service
Also included was the hiring of Doug Carlson, Teacher; Brandon Ford, Bus Driver; Heather Suckow, Jr. High Volleyball Coach; Cassie Martin, Assistant Volleyball Coach; Betty Koschmeder, Jr. High Cheerleading Coach; and renewal of coaching contracts for Gary Steffen, Head Baseball; Justin Denner, Assistant Baseball; Kolby LeFebvre, Assistant Baseball; Doug Sickles, Head Softball; Alicia Martin, Assistant Softball; Gene McCaffrey, Assistant Softball; and Brian Munkel, Assistant Softball.
• Greg Hiemstra gave the activities report. He explained the jamboree taking place on Aug. 18 at the new stadium.
• Supt. Ihns said approximately 68 percent of the expected student population has enrolled for classes. He mentioned a new teacher orientation on Aug. 17. A bus was to take the new teachers to all the communities in the district to help them understand where the students are coming from.
In addition, he stated, “I’ve had feedback to livestream the meetings. I’ve talked to Harold [Jensen] and Heather [Klenke of the IT department].” He also complimented Larry Trende and his crew on the buildings and grounds. “It looks great!”
• Cindy Butikofer of CIA Insurance gave the report on the annual renewal of the school’s policy. The board approved the renewal at $168,781, a decrease of $1,488 from last year.
• After some discussion, the board went with Transportation Director Brian Swestka’s recommendation of a $22,042 Dodge Grand Caravan from Harry Brown’s Family Automotive. Although it is not coming from Howard County, it fits the needs of the district better than local bids.
• Due to the Sept. 12 school board election, the regular meeting of Sept. 11 was postponed a week to Sept. 18.