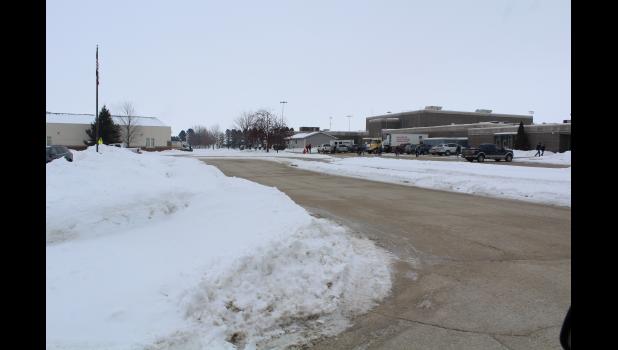 —Board looks at connecting K-8, high school buildings
By:
Marcie Klomp ~ News Editor tpdeditor@crescotimes.com
CRESCO - Travis Squires of Piper Sandler gave a presentation to the Howard-Winneshiek School Board regarding finding funds for a $4 million project at the Monday, Jan. 18 meeting.
Originally, a $23.6 million bond referendum was put on the Nov. 5, 2019 ballot and lost. Now, the board is looking at the most urgent piece of the previous plan — a building to connect the K-8 building with the high school.
If the board decides to move forward with the smaller project, Squires is ready to guide it financially. He noted there are ways to stay away from raising taxes, such as cash on hand, borrowing against PPEL (Physical Plant and Equipment Levy), accepting donations and more. “The stadium project was done with cash on hand,” he explained.
He also mentioned that with interest rates so low right now, doing a project sooner rather than later would cost about as much as waiting several years and paying the inflation of construction costs.
He figured a $4 million plan would mean a nine-year loan, which could be paid off early.
Buildings and Grounds Director Larry Trende gave some benefits for connecting the buildings:
• First and foremost is safety to the students who walk back and forth between the buildings all day long, in rain, snow or good weather. There have been instances of falls leading to a cost for health care.
• Lengthening the life of the gym floors. Currently students coming in from outside damage the floors, forcing them to be stripped and refurbished every year, rather than every-other year, a cost of $4,000-5,000 annually.
• No more opening and closing of doors in both buildings every 44 minutes, saving on heating and cooling expenses.
• In addition, a new gym could be added to the construction.
Before the board goes any further, a public hearing will have to be held. Members will likely vote on a date to hold the hearing at the next meeting, which was a week earlier on Feb. 8 at NICC — Cresco Center.