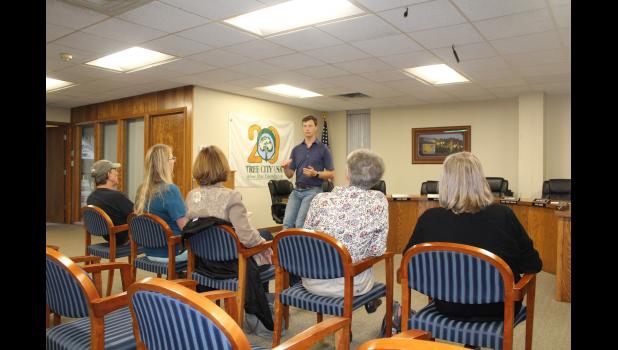 By:
Marcie Klomp ~ News Editor tpdeditor@crescotimes.com
CRESCO - State Auditor Rob Sand (Democrat) visited Cresco on Oct. 1, updating locals on what his office has been doing since he took over in January.
Sand, a native of Decorah, is all about promoting efficiency. “That is probably what pushed me to run for State Auditor,” he said.
Since then, he has cut expenses. Just one of the things he has done away with is mailing a copy of a town’s audit to each council member, as well as mayor and clerk. “We now e-mail the audit. We no longer print, bind and mail. We went from two people in that department to one.” The one worker wanted to quit anyway, and she told Sand not to rehire for her position. It was no longer needed.
Now he wants other state governments to look at ways to improve efficiency. “Say you need new gravel at the ball park and can’t afford it. Save little amounts by being more efficient, and maybe in three years it will be paid for.”
To help promote this effectiveness he has introduced his PIE initiative! “That stands for Public Innovation and Efficiency. It has a ‘PIE chart’ that includes a five-page checklist for governments to fill out each year to see how much they have improved over time.
“We are looking for PIE recipes, or ways to save money, and every year we will have a PIE contest, giving credit to those who are doing a good job.”
Those who submit PIE recipes will have their information on being more efficient available to others to use. That includes the private sector, because everyone benefits from efficiency.
The State Auditor is the taxpayer’s watchdog. So his work with PIE is certainly important. But another part of the job is working with lawsuits against the state. As  a prosecutor for the Iowa Attorney General’s office, he prosecuted the Hot Lotto fraud scandal.
He joked that his office is tri-partisan as there are Democrat, Republican and Independent staff members. They all work together to see what is best for the people.
He told attendees, “I upset some people in my party when I agreed to pay the legal fees in the Chris Godfrey case.”
Sand did not feel former Governor Terry Branstad exceeded the “level of intent” to force him to pay his own legal fees. Godfrey was an Iowa official who won a lawsuit for discrimination.
Another controversial case was against Dave Jamison, former Finance Authority Director. The state agreed to pay $4.1 million to settle claims from two women who were repeatedly sexually harassed by him. “I feel the taxpayers shouldn’t be on the hook for that. I voted against the settlement because no one could say if he was going to be charged.”
Sand has pretty strong feelings about sexual abuse and sexual harassment. As a prosecutor, he said when he asked potential jurors if they had been robbed, one person would say yes. For theft, one or two would raise their hand.
When sexual abuse came up, there could be 12-15 people who had a strong connection with it.
Healthcare worker Laura Hubka asked about privatization of Medicaid. “We have investigations open,” Sand said, but did not want to get into details.
He did admit he was upset that two quadriplegics were given a 30-day notice that they were no longer covered. “They came to me. We contacted the MCO (Managed Care Organization). The 30-day period came and went with no talk from the MCO. We started a compliance audit.”
He was heartened when some of the healthcare workers continued to care for the individuals, even when they weren’t sure they would get paid.
His philosophy is, “The public should always come before your party.”