Skip to main content
Home / News / Who are these crazy cyclists? 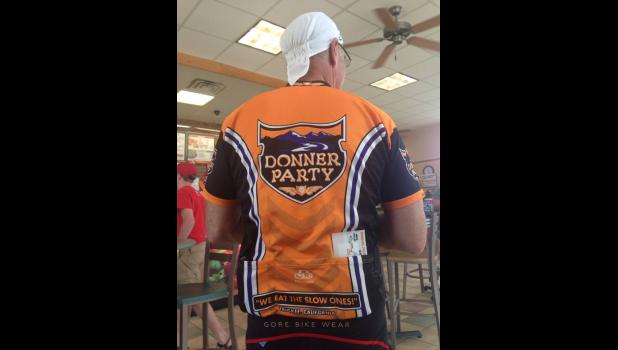 Who are these crazy cyclists?

By:
Marcie Klomp News Editor tpdeditor@crescotimes.com
CRESCO - RAGBRAI® assures Cresco officials there will be 12,000-15,000 authorized and non-authorized riders on the July 27 overnight stop, with an additional 5,000 support personnel.
That’s a lot of people!
Things have certainly changed since RAGBRAI®’s first ride in 1973. For the first few years, towns fed the riders for free. Also, since Paul Lovell started riding in 1987, the number of participants has about doubled. Thirty years ago, the teams were more rowdy and had less expectations.
And now most cyclists are associated with a team and a name. Perhaps it is descriptive, such as the group Keith Wherry of Cresco Bicycles belongs to . . . Rockford (Iowa) Cycling.
Others may be an acronym for something, like RAGBRAI® stands for Register’s Annual Great Bicycle Ride Across Iowa, and CUBS is Chicago Urban Bicycling Society.
Many names are just for fun and allow team members to stand out, such as Pork Bellies, numbering over 1,000 members and Team Stop A Lot.
Wherry and business partner Lovell shared some names of teams they have run into (figuratively) over the 30-plus years where they have been riding in the event. Lovell belongs to Team Borderline, which he said describes the area members are from (Iowa and Minnesota) “and our mental status!”
He mentioned a group named Team Bitch and the Booze Hounds. They may sound like a rowdy group, but are actually 50, 60 and 70 year olds. This group will be staying at Lovell’s since he stayed with one of their members’ homes when RAGBRAI® went through Fort Dodge.
Team Flamingo members have pink flamingos glued to their helmets. Wherry laughed, “One guy who is about 60 and weighs 300 pounds rides with a big pink feather boa!” The group even decorates their camp with pink flamingos.
The Donner Party have jerseys with beautiful mountain scenery and the saying, “We eat the slow ones!”
Team Baboon has a red patch on the pad sewed into cycling shorts, giving it the look of a baboon bum. They also have matching shirts.
Team Rawhide also references a sore behind.
There are about 60-100 members of Air Force Cycling Team. Showing the true spirit of the military, members’ main goal is to help people. Lovell noted they help cyclists with flats. They can be found all along the side of the road helping those in need. But leave it to the Air Force to also put some competition into the mix. “They see who has helped the most people that day!”
Team Adaptive Sports Iowa helps individuals with all sorts of disabilities participate in the largest ride in the world.
Team Road Kill decorates dead animals they find along the roadway. “They will put Mardi Gras beads and flowers on the road kill,” Lovell smiled.
Pat Boyle of MiEnergy belongs to Team Extreme. He’s not sure where the name comes from but thinks it is because team members come from the extremities of the country—Florida, Pennsylvania, Texas, Colorado, Minnesota, Wisconsin, Michigan and Iowa. They generally have 20 riders, but they have had over 60 at times.
A friend of Boyle’s belongs to Team Party Pants. They are from San Antonio, Texas, Colorado and Iowa. They are known for their wild and crazy pants!
Another team, Jack Hammer was named after the college, knick name of one of the founders of the group. On the team’s Facebook page, members claim, “Team Jackhammer is a collection of drinkers with a cycling problem!”
Team Where’s Waldo from southern Illinois dress up like (What else?) Where’s Waldo.
The Smoke Eaters is a team of firefighters from Cedar Rapids.
Other fun names include Huff N Puffers, Minnesota Bikings, Achin Knee, Pour Decisions, Neil and Dan’s Excellent Adventure, Cirque de Sore Legs and Escape from New York, to name a very few.
A lot of groups have team stickers. They’ll put the stickers everywhere . . . in bars, restaurants and people!
Besides team names, sometimes it’s the little things that stick out in a person’s memory.
Lovell recalls one day seeing an old farmer, 75-80 years old sitting out in the middle of nowhere, at the end of his long driveway pedaling a stationary bike. Another time some signs were posted “Free beer and whiskey ahead.” The local said, “It really was free. It was just an old guy who wanted to visit with people.”