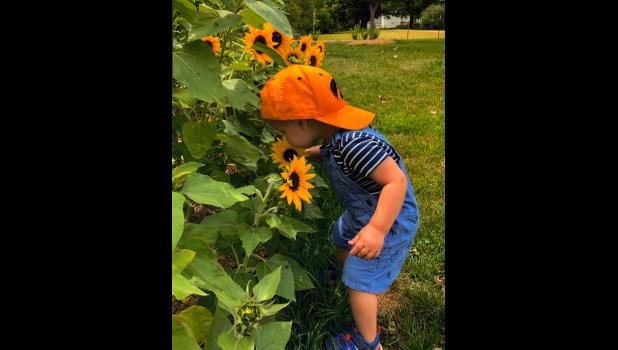 —Winners chosen at Ridiculous Day
CRESCO - “There were not as many participants as we usually get when the ‘My World’ Photo Contest is held during the Mighty Howard County Fair,” said Times Plain Dealer Editor Marcie Klomp, “but we were happy with the turnout of entries and quality of photographs.”
There were four categories and a Best of Show prize given. The top winner received $40 in Cresco Chamber Dollars. The first-place winners in the other four categories received $20 in Chamber Dollars and two Cresco Theatre movie passes. Second and third place photos were given a certificate. All prizes can be picked up at the TPD office.
The Best of Show winner was Diana Skoda Morrow of Decorah, who took a picture of her grandson, titled, “Stop and Smell the Sunflowers.” Judges thought the colors of his Hawkeyes hat matched the sunflowers perfectly. “Ms. Morrow also got up close and on the same level as her subject,” said one judge.
People
First: Morrow took the first-place prize for her “Baby Shark” photograph. A judge noted, “I liked the sharpness and brightness of color in the photo. The action view of this youngster resembles a “true shark!”
Second place went to Uncle Joe and Autumn, taken by Zach Gooder, and third was “Blooming Beauty” taken by Heidi Hunsberger.
Scenic, Nature & Places
Karen Stevenson took first place. “I enjoyed the ‘Never Give Up’ photo because I like being in nature and seeing all it has to offer. Plus, it’s always fun to go walking in parks or on trails and see what you can find. Sometimes you might find something no one has noticed before.”
Second place went to Heidi Hunsberger’s “Golden,” a field of sunflowers. Third place was “God’s Suspension Bridge,” submitted by Russ Stevenson.
Life in Iowa
“In the Field” was the winning photo, taken by Virginia Ashford of Cresco. A judge said, “I like the simplicity of the photo showing the horses in the field. It reminds me that field work can be completed without a combine or tractor! Harvest is an important part of the agricultural year. Horses used to be a big part of harvest in Iowa, and it is a great tribute to them.”
Second place went to Rebecca Caffrey for her photo “Harvest Time.” Third place was “A Little Girl and a Baby Lamb,” taken by Sterry Balik.
Youth - 18 & Under
Blaire Cummings, age 13, of Cresco took photos of the water tower and looking up into leafy trees. She took first place for the “Blue Watertower.” Judges like the blue tower against the blue sky and the sparkling water from the fountain.