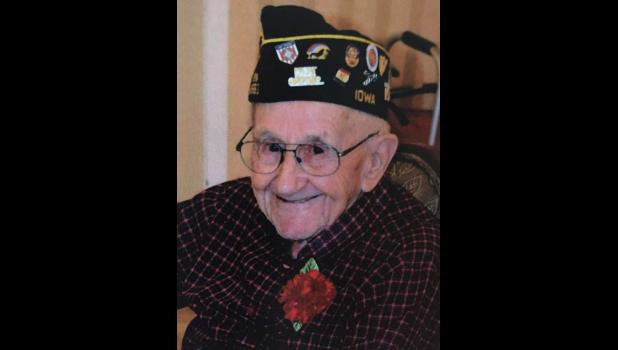 Sept. 30, 1917 —
Nov. 12, 2021
CRESCO - Alvin Clarence Sommer, age 104, of Cresco, Iowa, passed away on Nov. 12, 2021 at Regional Health Services of Howard County.
Funeral services will be held on Wednesday, Nov. 17, 2021 at 11 a.m. at Immanual Lutheran Church in Cresco.  Friends may call one hour prior to services at the church.  Burial will take place in New Oregon Cemetery in rural Cresco.  Lindstrom Funeral Home is handling the arrangements.
Alvin was born on Sept. 30, 1917 in Fillmore County, Minn., the son of Edwin and Della Sommer. He was baptized and confirmed at Granger (Minn.) Lutheran Church. He attended the Daisy Valley and Granger schools until eighth grade.
He worked on the family farm around Granger, and Culbert Implement Shop in Cresco until he was drafted into the U.S. Army on Feb. 17, 1945 and was honorably discharged as a Tech. 4 on Dec. 6, 1946. His training was at Camp Maxey, Powderly, Texas, and then he was shipped out to Yokohama, Japan, where he served as an automotive mechanic with the 63rd Field Artillery Battalion on Honshu and Kyushu, Japan during World War II.
Alvin traveled through Hiroshima twice after the atomic bomb had been dropped. He said he would never forget the after-effects it left and the lives that were lost. He was a life member of Veterans of Foreign Wars and an American Legion member. He was a remarkable man and proud to serve the country he loved so much.
Alvin was united in marriage on May 24, 1949 to Naomi Krueger at the Evangelical Church in Cresco. Naomi was tragically killed in an automobile accident in 1986.
He worked for International Harvester, Keune and Balk, and Keune Brothers before they moved to Stillman Valley, Ill. in 1962, where Alvin worked for 15 years for Fastener Division (Camcar) and five years for Lude Truck Sales before retiring back to Cresco.
Retirement was not for Alvin. He was always a hard worker. He did lawn mowing and snow removal and drove cars from auctions for H&S Motors and Cresco Motor Company. For about 18 years, he drove to Pine Ridge Indian Reservation in South Dakota to take part in Immanuel Lutheran Church’s service project.
Even when Alvin lived in the Evans Assisted Living apartments, he helped out in the laundry room, folding clothes, and wherever else he was needed, he was happy to help. He needed to keep busy. The list about his life could go on and on, but there are just too many things he did to help so many.
Alvin is survived by many nieces, nephews and friends.
He was preceded in death by his wife, Naomi; his sister, Marian (Elmer) Peter; brothers, Marvin (Dorothy) Sommer, Carl (Ora Mae) Sommer, Harold (Mary) Sommer and Virgil Sommer; and nephew, Jeff Sommer.