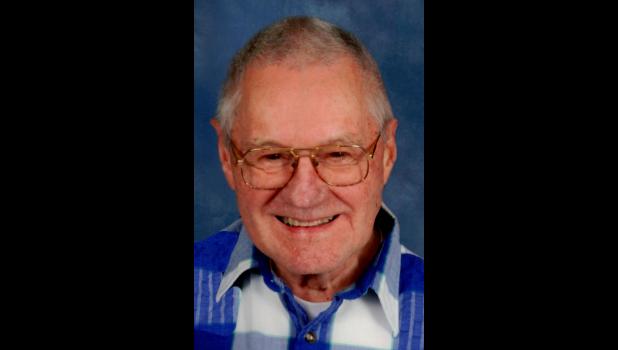 June 6, 1929 —
Aug. 2, 2021
CRESCO - Arnold Milton (Arnie) Peter, age 92, of Cresco, Iowa died on Aug. 2, 2021 after a two-week stay at Evans Home in Cresco.
Per his wishes, a private graveside service will be held, with a visitation at Lindstrom Funeral home in Cresco on Friday, Aug. 6, 2021 from 4-7 p.m.
Arnie was born on June 6, 1929, at his parents’ home in Winneshiek County, Iowa. He was the youngest child of Alfred Peter and Alice Elta (Libbey) Peter. He attended Orleans country school to the eighth grade, while farming with his dad. He proudly completed his GED in 1969.
In 1950 as a young adult, he contracted polio and spent many months in St. Marys Hospital in Rochester, Minn., recovering first from the virus and then rehabilitation to regain his mobility and strength. He worked hard and was able to live his life with few lasting effects.
On Sept. 19, 1954, he was united in marriage to Gwen Eaton, daughter of Lyle and Iowa Eaton, at the Methodist Church in Cresco. They lived in Cresco for three years while he worked at the Tin Shop. In 1958, the couple returned to farming east of Cresco, where there were always cows, pigs and chickens plus corn, beans and oats plus hay to bale . . . lots of hay to bale.
He was a patient teacher and wasn’t afraid to let his kids learn responsibility and trusted them to perform all kinds of tasks and chores. He continued to farm until they moved back to Cresco in 1985. He was a hard worker, and in addition to farming, he also worked at the Donaldson plant for a time and drove a school bus for How-Winn. After they moved to town, he worked at Grosz Hardware, Ace Hardware, Lindstrom Funeral Home and was the Cresco Bank and Trust custodian until he retired at 82.
He was very handy and could build and fix almost anything. He loved woodworking, and he and Gwen lovingly built three grandfather clocks, one for each of his three grandsons. He was also an active member of the United Methodist Church, singing in the choir, participating in the men’s group and serving on many boards.
Arnie is survived by his wife of nearly 67 years,  Gwen; daughter, Sherry (Alan) Whalen of Kasson, Minn; son, Steven of Cresco; three grandsons, Jeffrey (Mary) Whalen of Inver Grove Heights, Minn., Michael (Bianca) Whalen of Kasson and Thomas (Allison) Whalen of Kasson; and eight great-grandchildren, Cooper and Audrey Whalen, Rainn, Isaiah and Ryleigh Whalen and Joseph, Benjamin and Phillip Whalen, plus many nieces and nephews.
He was preceded in death by his parents, Alfred and Elta Peter; four sisters, Helen, Lucille, Marjory and Ione; and two brothers, Elmer and Roger.
In lieu of flowers, memorials may be made to HoCA or Howard County Community Hospice in his name.