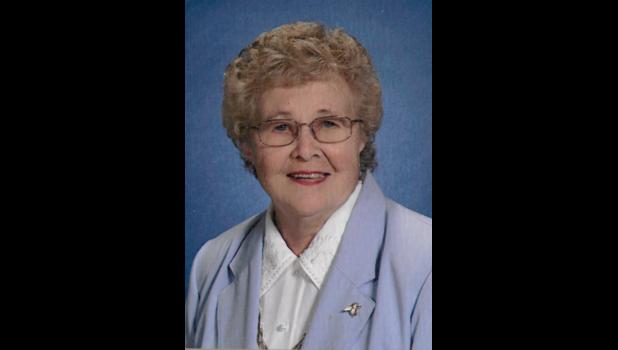 April 12, 1932 —
May 28, 2019
PROTIVIN - Beatrice “Bea” Taylor, age 87, of Protivin, Iowa, passed away on Tuesday, May 28, 2019, at Accura Healthcare of Cresco, Iowa.
A Mass of Christian Burial will be held at Holy Trinity Catholic Church in Protivin on Friday, May 31, 2019, at 10:30 a.m. with Father Aaron Junge officiating. Burial will be in Holy Trinity Catholic Cemetery. Visitation will be held on Thursday, May 30, 2019 from 5-7 p.m. at Hindt-Hudek Funeral Home in Protivin and will continue at the church for one hour prior to the service on Friday.
Bea was born on April 21, 1932, the second daughter of John and Lucy Berka. She attended Rudolphinum School in Protivin and lived on a farm by Protivin. On Sept. 11, 1950, she married Alvin Taylor at Holy Trinity Catholic Church. To this union four children were born, Darrell, Harlan, Lynelle and Allen. The couple always farmed north of Protivin. Later on, they moved to town but continued farming. In later years, Bea was a cook at Cresco Care Center. She enjoyed ceramic painting, playing cards, cooking, gardening, and she baked wonderful kolaches and rolickys.
She was a member of the Protivin Czech Choir for many years. Also she enjoyed Wednesday night league bowling with the Art’s Milling Team. Bea’s faith was very important to her, and she was a life-long member of the Holy Trinity Parish. She was a wonderful and cherished wife, mother, grandmother and great-grandmother.
Bea is survived by her husband, Alvin of Protivin; children, Darrell of Seattle, Wash., Harlan (Avis) of Sumner, Iowa and Lynelle (Owen) Grube of Cambridge, Minn.; grandchildren, Dan (Lindsey) Taylor of West Des Moines, Iowa, Julie (Jordan) Kruse of Waverly, Iowa, Greg (Wendy) Grube of Andover, Minn., Laurie Grube of Laguna Beach, Calif., Amanda (Jason) Hovey of Preston, Minn., Nick (Melissa) Taylor of Plainfield, Iowa and Tiffany (Chris) Griffin of Louisiana, Mo.; and great-grandchildren, Connor, Braelyn, Taylor, Brinlee, Otto, Stella, Trent, Alyssah, Oliver, Blake, Grace and Gavin.
She was preceded in death by her parents, John and Lucy Berka; sister, Arlene; son, Allen; and two great-grandchildren, Tyler and Baby G.
Online condolences may be left at www.Hindthudekfuneralhomes.com.