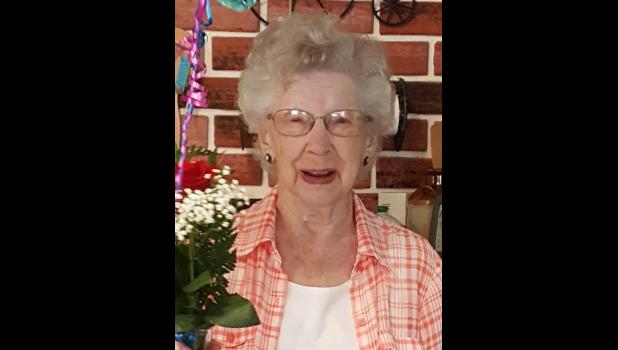 Aug. 16, 1924 —
July 27, 2020
CRESCO - Betty (Byrnes) Moen, age 95, of Cresco, Iowa passed away on Monday, July 27, 2020 at Country Winds Manor.
A private family Mass of Christian Burial will be held at Notre Dame Catholic Church in Cresco, with Fr. Jacob Rouse officiating. Burial will be in Calvary Cemetery, Cresco. A public visitation will take place on Friday, July 31, 2020, from 5-7 p.m. at Hindt-Hudek Funeral Home in Cresco. Due to COVID-19 restrictions, masks are required and social distancing will be practiced.
Betty was born on Aug. 16, 1924 in Howard County to Louis and Tressa (Broskey) Byrnes. She attended Vernon Springs #6 Country School during her elementary years, often riding her horse to school. She then attended and graduated from Assumption School, and while there, she played basketball and kittenball. After graduation in 1942, Betty attended the Electronic, Radio and Television School in Omaha, Neb., graduating with a diploma in Teletype and Airline Communications. She then obtained a job with TWA in Dayton, Ohio.
After returning to Cresco, she met and married Oscar L. Moen on Aug. 10, 1946 at Assumption Church. The couple had five children.
She was very active outside the home. She enjoyed being on a bowling league, serving as a 4-H leader and being active in the Assumption Church. Betty and Oscar belonged to the Driftrunners Snowmobile Club and liked riding with club members. Betty also loved to dance and would attend dances in Spillville, Harmony and at Matters.
She worked for Donaldson Company for 16 years, and after retirement she enjoyed attending the UAW Retirees’ meetings.
Survivors include her children, Terri Offerman of Stevens Point, Wis., John Moen of Cresco, Peggy (Randy) Hovey of Cresco, Jim Moen (Pam Kuennen) of Zumbrota, Minn. and Jeff (Gina) Moen of Grimes, Iowa; eight grandchildren who are all casket bearers and honorary casket bearers; and 10 great-grandchildren.
She was preceded in death by her husband; parents; her mother- and father-in-law, Oscar T. and Llora (Becker) Moen; brothers, Robert Byrnes and John “Jack” Byrnes; brothers and sisters-in-law; special daughter-in-law, Kristin Moen; and great-grandson, Tyler Jason Hovey.
In lieu of flowers, the family requests memorials be directed to Country Winds Manor or Howard County Community Hospice.