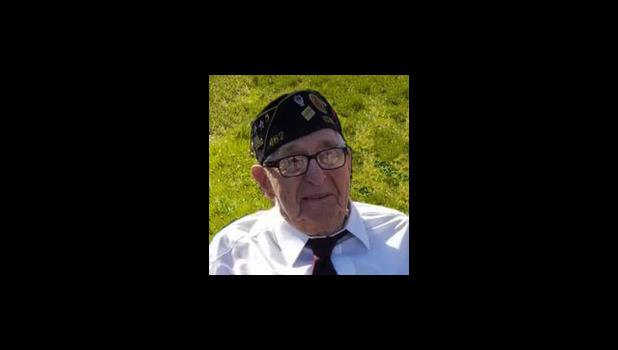 Feb. 25, 1926 —
Aug. 28, 2020
Spillville - Charles “Chuck” Clinton Ira, age 94, of Spillville, Iowa, passed away on Friday, Aug. 28, 2020 at Aase Haugen Senior Services in Decorah.
A Mass of Christian burial with full military honors was held on Sept. 4, 2020 at St. Wenceslaus Catholic Church in Spillville. Burial was in the St. Wenceslaus Cemetery.
Charles was born on Feb. 25, 1926 in Spillville, the youngest of four children to Adolph and Emma (Cibuzar) Ira. He attended grade school in Spillville and graduated from Calmar High School. As a young boy, he enjoyed living by the river where he was a few steps away to fish, ice skate or make ice to deliver to local families. He earned money by herding cows through town to pasture in the mornings and brought them back again in the evenings. He also mowed lawns and worked at Haug’s Department Store.
Charles enlisted in the U.S. Navy and was sworn in on his 17th birthday in 1943. After Basics at Great Lakes Naval Training Center in Chicago, he reported for duty aboard the USS Battleship Texas, the flagship of the Normandy Fleet. He served in the Atlantic and Pacific Theaters, including the Invasion of Normandy, Cherbourg, Southern France, Iwo Jima and Okinawa. While on the Texas, Charles was a gunner on a 40MM anti-aircraft gun mount. He witnessed raising the American flag on Mt. Surabachi at Iwo Jima, where the Texas was positioned about 1,000 yards off shore. He was honorably discharged in 1946.
Charles spent a few years as an iron worker and was assigned to the building of the Veterans’ Memorial Hospital in Iowa City. He returned to Spillville in 1950, where he purchased the Spillville Feed Mill and remained in that business for 30 years.
Chuck met his future wife, Dolores Jarosh, at the Inwood Ballroom, and they were married on May 7, 1951 at Assumption Church in Little Turkey, Iowa. In 1956, they built a home in Spillville, and in 1969 they purchased a small farm with 6,000 laying hens. They also raised some cattle and hogs, fed and chased a few horses and had enough work to keep all the kids busy.
Charles was a lifetime member of the American Legion Post #467 (where he served as Commander for several years), Veterans of Foreign Wars, The Disabled American Veterans, Veterans’ Affairs in Decorah, The Holy Name Society, St. Wenceslaus Catholic Church, St. Wenceslaus Parish Historical Society and the 4th Degree Knights of Columbus.
He and Dolores were involved in the TEC and Pre-Cana programs. Chuck also served on the South Winneshiek School Board for three years and was finally awarded his high school diploma by the Superintendent, 40 years later!
He was a survivor! He battled undiagnosed PTSD, proudly overcame alcoholism in 1965 and celebrated 55 years remaining sober until his death. He was a member of Alcoholics Anonymous and helped many people over the years successfully work the 12-step program of AA.
Over the years, Chuck and his bride enjoyed many dances at the Inwood Ballroom. They were also avid fishing buddies, and instilled their love for fishing to their children, grandchildren and great-grand- children.
They attended several reunions for the USS Texas, and traveled to Mexico, Hawaii and the Czech Republic. They were fortunate to locate some relatives on some of their travels. Charles was a great cheerleader for his children and grandchildren’s many activities like football, basketball, baseball, softball, track and 4-H.
In 2001, the couple retired from the farm and moved into a new house in Spillville built by UKC (Us Kids Construction). In retirement, Chuck loved to play cards (especially Dade’ with the Spillville guys), put puzzles together and watch baseball, softball and National Geographic on TV.
He is survived by his wife of 69 years, Dolores; five daughters, Rona Ira-Messmore of Hudson, Iowa, Peggy Novak of Cedar Falls, Iowa, Nancy (Steve) McGrew of Van Horne, Iowa, Cindy Ira (Galen) Smith of Worthington, Minn. and Teresa (Jeff) Kennon of Lime Springs; two sons, Jeffrey Ira of New Hampton, Iowa and Terry (Amy) Ira of Iowa City; grandchildren, Scott (Bobbi) Messmore, Patrick (Renee) Messmore, Brent Messmore, Nick (Ashley) Chardoulias, Andrew (Whitney) Chardoulias, Erin (Nate) Haas, Alex (Katelyn) McGrew, Jason Smith, Rachel Smith, Leslie (Fiancé Ryan Young) Ira, Kathryn (Austin) Moore, Abby Kennon, Cassy Kennon, Emily Ira and Luke Ira; 26 great-grandchildren; numerous step-grandchildren and step-great-grand- children; and several nieces and nephews.
Chuck is now reunited in paradise with his parents, Adolph and Emma Ira and three brothers, Virgil, Victor J. and Victor V. Ira. He is holding his baby great-granddaughter, Catherine Messmore, on his lap; talking about the war with his son-in-law, Larry Novak; giggling, laughing and putting puzzles together with his daughter-in-law, Jennifer Ira; and enjoying a great meal with the ability to eat all the sweets he wants!
In Lieu of flowers: Memorials may be sent to the family, Dolores Ira, P.O. Box 301, Spillville, IA 52168.