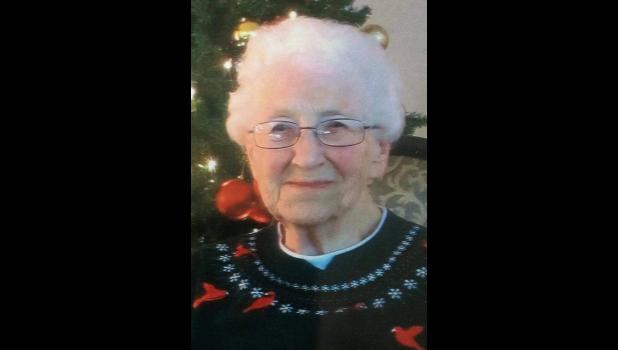 July 14, 1923 —
Dec. 30, 2020
CRESCO - Corrine Moudry, age 97, passed away on Wednesday, Dec. 30, 2020 at Accura HealthCare, in Cresco, Iowa.
According to her wishes, Corrine’s body was gifted to the University of Iowa Deeded Body Program. Hindt-Hudek Funeral Home is assisting the family. Services are postponed until a later date.
Corrine Kapler was born on July 14, 1923 to Henry and Thekla (Holthaus) Kapler in Cresco. She grew up on the family farm, just outside of Cresco, with her five siblings. After graduating from Cresco High School, she moved to Mason City, Iowa where she worked for a local bank. A short time later, she moved back to Cresco, where she worked for the Interstate Power Office until her marriage to Edward Moudry. They were married on Aug. 28, 1945 at St. Joseph Catholic Church in Cresco.
Early in their marriage, they worked alongside Edward’s parents, tending to the farm located northwest of Protivin, Iowa before starting out on their own. In 1994, after 49 years of farming, the couple decided to retire and moved to a new home in Protivin.
Corrine loved spending time with her family and enjoyed getting together with family and friends. She was a life-long member of Holy Trinity Church, a member of the Rosary Society, as well as a charter member of the Domestic Executives Club in Protivin. She moved back to Cresco in 2012. In her spare time, she loved baking, gardening, embroidering and anything involving the outdoors.
Corrine is lovingly remembered and survived by her children, Martha (Ernest) Fencl of Cedar Falls, Iowa, Brian (Gloria) Moudry of New Hampton, Iowa, Bruce (Linda) Moudry of Evansdale, Iowa, and Monica Zapotocny (special friend Jim Bouska) of Cresco; grandchildren, Craig Fencl, Blair Fencl, Nick Moudry, Todd Moudry, Kristen Ward, Jill Joyner and Scott Moudry; 11 great-grandchildren; sister, Virginia Powers; sister-in-law, Bootie Kapler; and several nieces and nephews.
She was preceded in death by her parents; husband, Edward in 2008; and brothers, Leonard Kapler in infancy, Robert Kapler in youth and Herman “Ike” Kapler; sisters, Marie (Theron) Mackenburg and Annette (Victor) Polashek; grandson, Mark Moudry at birth; brother-in-law, Theodore Powers; and son-in-law, Les Zapotocny.