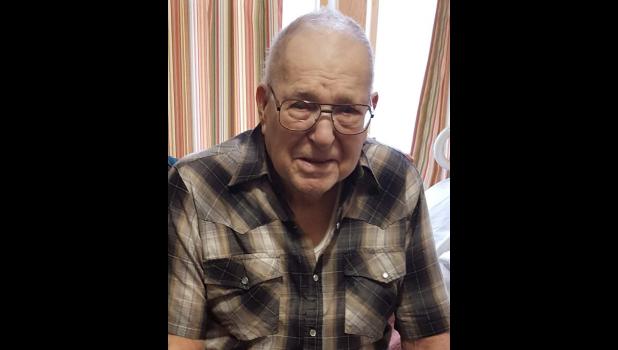 Nov. 28, 1923 —
Nov. 13, 2021
CRESCO - Darrell D. Derry, age 97, of Cresco, Iowa and formerly of LeRoy, Minn. died on Nov. 13, 2021 at Regional Health Services of Howard County in Cresco. He had been a resident of Evans Memorial Home in Cresco for the past six years.
Funeral services will be held at 1 p.m. on Friday, Nov. 19, 2021 at Hindt-Hudek Funeral Home in Riceville, Iowa. Burial will take place at the LeRoy Cemetery. Visitation will be one hour prior to the service on Friday at the funeral home.
Darrell Dean Derry, the son of Henry and Olive (Marchant) Derry, was born on Nov. 28, 1923 in Jamaica, Iowa. He graduated as valedictorian from Bagley (Iowa) High School. He joined the United States Army in 1945 and assigned to the Headquarters and Service Company of the 307th Airborne Engineering Battalion at Fort Bragg, N.C. His specialty was Rifleman. He also earned a parachute badge and WWII Victory Medal.
On Sept. 22, 1947, he was united in marriage to Doris Irene Cora Lewis at Wesley Methodist Church in Fort Dodge, Iowa. They lived on various farms in Iowa and Minnesota until they moved to LeRoy in 1964.
Darrell farmed in the summer and drove semi-truck in the winter for Little Audrey out of Austin, Minn. In 1974 he decided to drive truck full time. When he decided to semi-retire, he worked for Hanson Tire Service and Agra out of LeRoy, driving truck locally.
Darrell loved to travel in his camper, go fishing when he could and fix things. He was a real handy man and liked working on cars and loved trading cars. He always said he wanted to try everything at least once. He loved to eat Chinese and Mexican food and especially Doris’ home-cooked meals.
Darrell was a good and devoted husband, who helped raise seven children.
He is survived by six children, Deborah (Robert) Hofner of Ostrander, Minn., Roger (Lynne) Derry of Mason City, Iowa, Rick (Kim) Derry of McIntire, Iowa, Randy (Mary) Derry of Spring Valley, Wis., Darla (David) Schroeder of Las Vegas, Nev. and Dawn (Evan) Woller of Merrill, Wis.; 20 grandchildren; 54 great-grandchildren; and six great-great-grandchildren.
He was preceded in death by his parents; wife, Doris on Nov. 14, 2016; son, Kerry Derry on Feb. 6, 2014; three sisters; and one brother.
Condolences may be left at www.Hindtfuneralhomes.com.