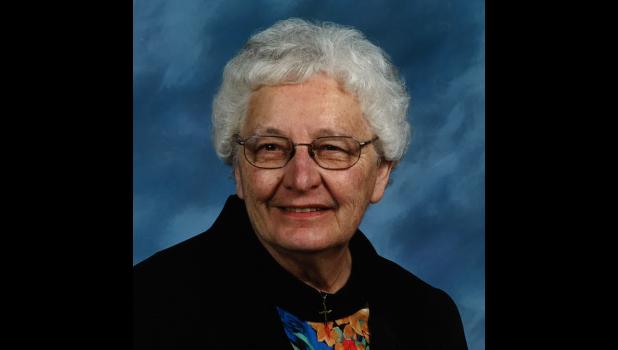 Dec. 20, 1928 —
March 24, 2021
PROtiVIN - Dorothy A. Stika, age 92, of Protivin, Iowa, died on Wednesday, March 24, 2021, at Accura HealthCare of Cresco, Iowa.
A public Mass of Christian Burial was held on Monday, March 29, 2021, at Holy Trinity Catholic Church in Protivin, with burial in the church cemetery.
The world became a better place on Dec. 20, 1928, the day Dorothy was welcomed into the world by her parents, John and Frances (Pecinovsky) Hruska on their farm in rural Howard County.
She grew up on the farm, helped her parents with a variety of chores and attended school through the 10th grade at Rudolphinum Catholic School in Protivin. After completing her education, she continued helping her parents on their farm and also worked for area farm families — helping with childcare, cooking and cleaning.
Dorothy met a young man on a neighboring farm, Robert Stika, and the two fell in love and were married on Oct. 28, 1947, at Holy Trinity Catholic Church.
It was the beginning of a more than 40-year marriage that was filled with love, hard work and kindness. The couple eventually had 10 children, Gerald, Mary, Helen, Michael, Dale, Shirley, Geralyn, Bob, Ron and Denise, who grew up with a mom who always put her family first.
Dorothy always had something — whether it be fresh-baked cookies, homemade bread, kolaches or the best cakes ever baked — waiting for them when they arrived back at the farm after a day at school. She was also a great cook and made everything from scratch. One did not go to the Stika house and ever leave hungry; in fact, most of the time, Dorothy not only fed visitors, but she also sent food home with them.
She loved her children and taught them values and lessons they have kept to this day. Dorothy was a passionate believer that one never did something without giving it their all. She also set an example of kindness and fairness.
She and Robert worked their farm together for more than 40 years, and it was a true partnership. She helped raise chickens, tended two big gardens and took care of her family. Her kids learned a valuable lesson that one never said “I’m bored” around her because she’d find a job for the person who had made the mistake of uttering those words.
Sundays were for visiting. The Stikas would pile into their car, and the kids had no idea where they were going. If they asked, Dorothy would use a Bohemian word for “forward.” The destinations were often different, but they always centered around family.
In 1987, Dorothy and Robert retired and moved off the farm they had called home for more than 40 years, north of Protivin , and Robert passed away the following year. It wasn’t the first tragedy Dorothy had to endure — her youngest child Denise was just eight-years-old when she was killed in a van-bicycle accident in 1976 — but she was a strong woman with deep and abiding faith.
She started babysitting, worked with the elderly and took a job at The Mint in Protivin, where she worked for almost 20 years; she didn’t retire until she was 78.
Dorothy’s family continued to grow, and by the time of her passing, she had 24 grandchildren, 38 great-grandchildren and two great-great-grandchildren. The greatest gift Dorothy gave them was the same one she had given her children — her time.
She was an active member of Holy Trinity Parish for her entire life and gave back to her church in a variety of ways, including as a member of the Rosary Society and helped provide luncheons following funerals. Dorothy, in short, was a kind soul, and she was wealthy, too. Not in the monetary sense, mind you, but in the important things in life — family, faith, kindness, fairness and love. She will be dearly missed by her large family, but they are grateful that their mom, grandmother, great-grandmother, and great-great-grandmother is reunited with her husband after 33 years of separation, and that she is overjoyed to be with the three children who went before her.
Dorothy is survived by seven children, Mary Cheville of Ames, Iowa, Helen Watson of Lebanon, Mo., Michael (Yvonne) Stika of Madison, Ind., Shirley (Stewart) Nelson of Ames, Geralyn (Fred) Smith of Waukon, Iowa, Bob (Colleen) Stika of Cresco, Iowa and Ron (Elaine) Stika of Cresco; 24 grandchildren; 38 great-grandchildren; two great-great-grandchildren; one sister, Betty Balik of Cresco; one brother-in-law, Art (Rosie) Stika of Decorah, Iowa; and two daughters-in-law, Mary Jane Stika of Catoosa, Okla. and Mercy Stika of Buckeye, Ariz.
She was preceded in death by her parents; her husband; three children, Jerry Stika in 2004, Dale Stika in 2021 and Denise Stika in 1976; two brothers in infancy; two sisters, Wilma Zajicek and Lucille Winters; and numerous in-laws.
In lieu of flowers, Dorothy’s family requests that memorials be made to Trinity Catholic School in Protivin or Howard County Community Hospice.
Hugeback Johnson Funeral Home and Crematory is entrusted with arrangements. Online condolences for Dorothy’s family may be left at hugebackfuneralhome.com.