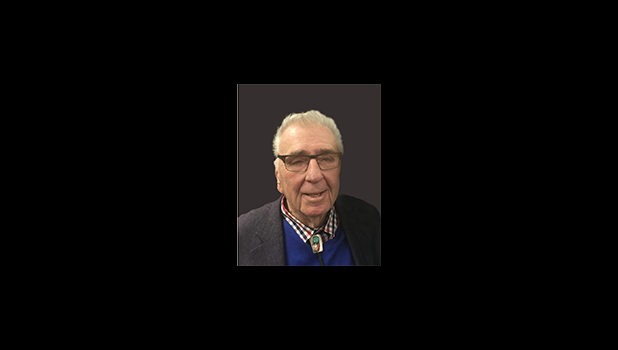 Sept. 15, 1929 —
Nov. 3, 2019
DECORAH - Duane Kenneth Bruening, age 90, died peacefully on Sunday, Nov. 3, 2019 at Barthell O.E.S. Home in Decorah, Iowa.
A Mass of Christian Burial was held on Friday, Nov. 8, 2019 at St. Benedict Catholic Church in Decorah with Rev. Donald Hertges and Rev. Msgr. Edward Lechtenberg officiating. Burial was in St. Benedict Catholic Cemetery in Decorah with military honors.
Duane was born on Sept. 15, 1929, in Shenandoah, Iowa to Leo and Theresa (Baumler) Bruening. The family traveled and lived in several states, before settling in Decorah.
Duane graduated from Decorah High School in 1947 and went on to Iowa State to study Electrical Engineering; after a year he transferred to Loras College to study Accounting & Economics, graduating in 1952 with a Bachelor of Science degree.
While at Loras, Duane met Eileen Marie Murphy, the love of his life, at a college mixer where they discovered they shared the same birthday, which remains a novelty and family anecdote. They were married on Dec. 1, 1951.
Upon graduating, Duane left for his Marine Corps basic training at Paris Island, N.C. and went on to Officer Candidates School at Marine Corps Base, Quantico, Va. He was assigned as a top-secret nuclear technician. He advanced to the rank of Captain and remained in the United States Reserves until after the Cuban Missile Crisis.
Professionally, Duane joined his father Leo in 1954, to build the family business, Bruening Rock Products Inc. Throughout the next two decades, he advanced BRP to become the recognized and leading corporation it is today. Industry and community leaders encouraged him to further his vision of taking BRP from a Mom-and-Pop to a regional entity. With his sons, Greg and Keith, the company grew, now four generations. This was a source of pride for Duane as it was a true representation of the legacy of his life’s motto.
He lived by the motto of “Work, Family, Country, God” . . . in that order, something that Duane continuously incorporated throughout his life. Eileen instilled a strong sense of community and an appreciation for the arts, and they both drove the importance of education and strength in family. He complemented his wife by further instilling a strong work ethic, a respect for country, and the importance of generosity — not only to family — but to the community.
Duane was elected to and served on the boards of trustees of Luther College, Northeast Iowa Community College and Loras College. He advocated for all advanced education, not only as a whole, but how the path of pursuing education can propel an individual to surpass their expectations and even help to define them.
Additionally, Duane was involved with the Associated General Contractors, inducted into the Hall of Fame in 1996; Iowa Limestone Producers Association; Decorah Development; Oneota Golf and Country Club; Gainey Ranch Golf Club, Scottsdale, Ariz.; and was a lifelong member of Benevolent and Protective Order of Elks. He was a stalwart Republican, though he believed in voting for the man and not the party.
Duane and Eileen were committed patrons to the Norwegian-American Museum, Vesterheim, believing it to be a cultural and educational institution for the community.
His philanthropic commitments included the Allamakee and Winneshiek County Fairs, notably as an enthusiastic presence during the livestock auctions; the Mayo Clinic Foundation; numerous scholarship awards to national and local institutions; and The Wounded Warrior project and affiliated Marine Crop charities for active and veteran groups.
One of Duane’s greatest pleasures was to anonymously surprise people with something special and sometimes life changing. He was a loyal and steadfast friend, standing by — no matter the circumstance, supporting when needed, without judgement.
He is much loved by his children, grand and great-grandchildren, to whom he devoted endless time organizing “Boys and Girls” days, acting as the “Official Guardian” of the Halloween candy and the “Master Cookie Taste Tester.” As the holidays approached, Duane’s military background came into play as he strategized with his grandchildren on the best ways to ‘trap’ Santa and hope for the arrival of his long overdue… green motorcycle with a sidecar. He received immense joy shopping for his loved ones, always finding that unique and ultimately, perfect “something.” He lived life to the fullest, embracing all celebrations.
Duane was a remarkable storyteller and took pleasure in sharing Ole and Lena jokes with his Tusk Club “fellows.” Many will remember him for his “lucky” $2 bills.
Duane is survived by his children, Helen Barbier (Guy) of Rougemont, Switzerland, Frederick ‘Fritz’ (Tammy) of Grand Blanc, Mich., Gregory ‘Greg’ (Karen) of Decorah, Mary Rayburn (Philip Lee) of Hunt Valley, Md., Keith (Amy) of Decorah and Elizabeth Bruening of Polk City, Iowa; grandchildren, Jocelyn (Joey) Clarine, Ashely Eileen Gjorcevski, Guy-Thomas Barbier, Tyler, Camille Barbier, Henri Barbier, Theresa (Jameson) Bamrick, Jacob, Amanda, Gabrielle Cowie, Claudia Cowie, Michael, Nathaniel Cowie, Katherine, Rebecca and August Cowie; great-grandchildren, Alayna, Bennett, Fiona Clarine and Aurora Eileen Bamrick; one sister, Loma Carlson; and two sisters-in-law, Alvina Murphy and Betty Murphy.
Duane was preceded in death by his wife, Eileen; his sons, Steven and Michael; parents, Leo and Theresa (Baumler) Bruening; sister, Beverly (Ruen) and husband Don White; brother, Lowell (Buzz) and wife, Sonja; granddaughter, Natalie Bruening; brothers-in-law, Virgil and Louis Murphy and Fritz Carlson; and sons-in-law, Guy Barbier and Robert Cowie.
Memorials may be given to Elks Lodge or Vesterheim Norwegian-American Museum, both in Decorah.
Fjelstul Funeral Home in Decorah is serving the family.
Online condolences may be made at www.fjelstul.com.